The Jacobs School of Engineering at UC San Diego has enlisted the help of a robot skateboard to promote the idea that “science is cool,” at last week’s San Diego Science and Engineering Festival held on the university’s campus.

The robot is essentially a pair of springs mounted to the deck of a skateboard compressed using a car jack. UCSD students, with the assistance of faculty members Raymond de Callafon and Nate Delson, designed the springs to replicate human legs, applying downward force on the board in order to make it jump. The highlight of the demonstration was the board’s release down a ramp, followed by a hop over scientist Paul Schmitt lying on the floor of the campus gym.

“Engineering is not boring,” student David Quintanilla told a crowd of about 400 gathered for the demonstration. “Engineers are not nerds!”

Funding for the project comes in large part from military contractors BAE Systems and SPAWAR, and the robotic skateboard team is working toward a product that could match a skilled human in terms of skating skill.

“We’re trying to get children interested in science,” de Callafon told UCSD’s NewsCenter. “We have a combination of the right buzz words: robotics and skateboarding.” 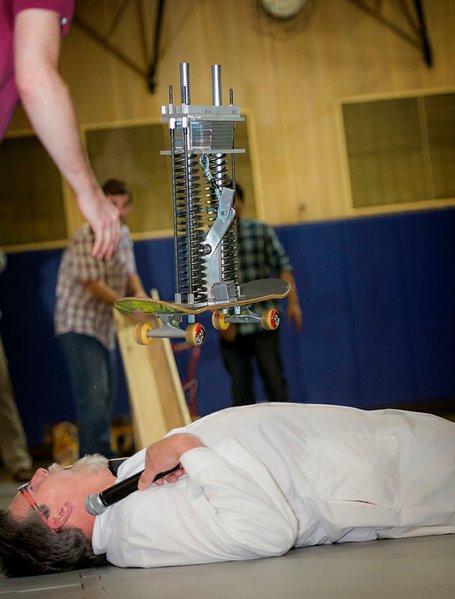