Some of San Diego's richest and most controversial developers are pouring money into one of its poorest city council districts in a well-funded effort to elect a top aide of the man who quit the seat in the midst of his term. 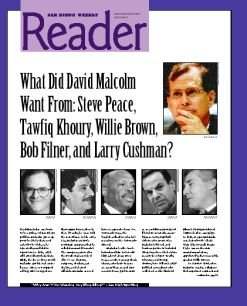 Candidate Bruce Williams has been a policy advisor to 4th district Democrat Tony Young, who walked away from the job late last year to become head of the local Red Cross.

The former Republican Williams worked for GOP mayors Dick Murphy and Susan Golding, becoming a Democrat just recently. He ran against Young in 2004 and 2006, losing both times.

In a filing with the San Diego city clerk's office, a group calling itself San Diegans for Strong Neighborhoods in Support of Bruce Williams for City Council 2013 says it raised $8,000 from the beginning of this year through March 9.

$7500 of the money was reported to have been contributed by Annie Malcolm, president of Suncoast Financial and wife of David Malcolm, the ex-port commissioner brought down by the Duke South Bay plant lease conflict of interest scandal, during which he copped a plea and avoided prison time.

A separate filing shows that another donor to the Williams cause is Tom Sudberry, president of Sudberry Properties, a major real estate development outfit, who gave $1500 on March 12.

Meanwhile, another developer backed group, San Diego County Voters for Progress and Reform, has spent $4367 against 4th District Democrat Myrtle Cole, the labor-backed candidate, as disclosed in a March 13 filing.

According to the San Diego city clerk's office, the committee has filed no contribution disclosure reports for this year; the fund's year-end 2012 filing could not be immediately located.

Update: Liam Dillon of the Voice of San Diego online news organization has advised us via Twitter that the Fourth District is not the poorest city council district, per figures of SANDAG, a government agency that compiles demographic information. We have changed the copy to reflect his information.

I feel sorry for folks in the 4th Council District -- they have had such lousy representation. They should fuggedabout voting for changeling Rep/Dem Bruce Williams who takes big money from builders and developers -- just the way his former boss Tony Young did. (You have to go along to get along over in mid-term to a cushy job running the Red Cross.)

And voters should forget about most of the other candidates in the crowded field. The one standout is Barry Pollard, a Democrat who knows the community and has served it well, has a credible campaign organization and an honest history. People should do themselves a favor and vote for a highly qualified person for a change, Barry Pollard.

I set about to prove what can only fall on deaf ears: That 70,000 killed over the border is genocide. I know who is in charge of the state with Acapulco in it, which had 32 murders just outside of town in the past twelve days. He was elected, but he left to run another state somewhere else in Mexico such that in the interim it is in the circle; it's all good.

Well, obviously it is the entire country of Mexico which is corrupt,yea, because Acapulco connects to it all. To a fault I don't need to see where everybody was. Steve Billinghurst is afraid of no man. I'm not afraid to tell the truth, and Tony Young is of that ilk as the Mexican official, as shown here by any kind of leaving for greener pastures. You have to start with honest men who do not need to do anything to hide anything.

You can't say anything about cannibals, i. You have never been hungry, ii. You eat people other than you: More Mexicans died at the hands of others in Mexico than Americans caused Americans to die in Vietnam. Every 13-year-old and younger is experienced at living in our form of Austria, at war(s), with humans reduced to ashes in his name.

I puke on Shenandoa. Sailors are used to getting flogged, they won't stand up to the push. "I want some coke," said Meryl, "a-cola", she emphasized.

Shenandoah. I probably don't like either one, or any other place names, because Matt Potter has plastered descriptions on "Suncoast", and "Sudberry", things you go, "That is the arted". Arts were used in the production, to sell you whom in his own way is ultimately misled. Welcome from a few different faces. We have on to has sticky traces.