The San Diego chapter of the Palestine Children’s Relief Fund set a new donations record at its annual fundraising banquet, “Healing Hearts, Building Hope,” on the evening of Sunday, March 10.

Money raised from the event goes toward the Fund’s Healing Heart Campaign, started in 1998 to provide clinical care for Palestinian children in the Gaza Strip with congenital heart disease. The group is working toward developing a team of local specialists and building a cardiac surgery unit in Gaza due to military travel restrictions that make it difficult for patients to travel to receive treatment.

“Our organization was established in 1991 to address medical and humanitarian issues addressing youth in the Middle East,” explains Aya Malhas-Kassidi, one of the event organizers. “We started in Palestine, but since then have offered services to youth from Iraq, Lebanon, and Syria.” 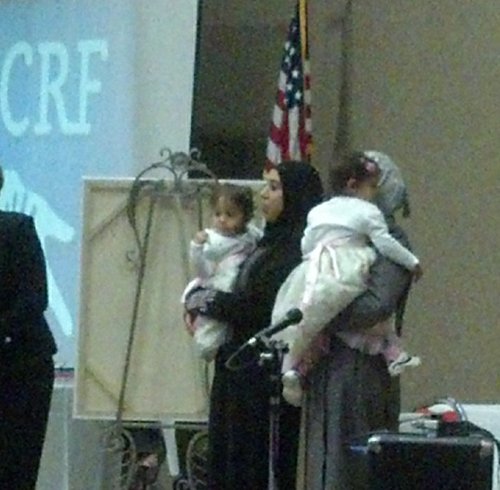 Farah Khaireddin, the local chapter president, also spoke, recalling how she got involved after her mother, who founded the first local group, hosted a child burn victim and others flown to San Diego for treatment when she was young.

Video presentations showed the children’s treatment center under construction in Gaza that donations were being collected to finish funding – the group hopes that the center will open its doors in April. Another video followed up with children several years down the road who had in the past ventured to San Diego for treatment, such as Nadal, who was shot in the eye at age 5 ½ and suffered eye and brain infections in a local hospital before being brought to San Diego, where he stayed for seven months before moving into the home of Abu Amir, whose family cared for him until his treatment was complete and he was able to return home. 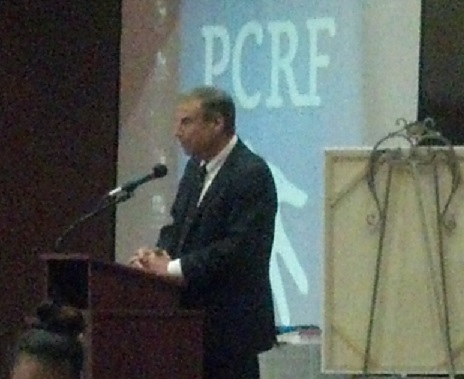 Mayor Bob Filner, who has established a habit early in his tenure of attending numerous community functions, also stopped by to speak, touching on his travels to the Palestinian territories during his time in Congress and voicing his continued support for the region and the establishment of a Palestinian state.

Craig and Cindy Corrie delivered the keynote address to the gathering. The Corries’ daughter, Rachel, was killed on March 16, 2003 while in Gaza and attempting to stop an Israeli bulldozer from demolishing the home of a pharmacist with whom she had been staying. In the time since, they have established the Rachel Corrie Foundation for Peace and Justice to continue their daughter’s activism.

“Much of our personal work is aimed at challenging the policies that support the Israeli occupation and the siege of Gaza, and the policies that we believe deter peace in the region,” said Cindy. “As long as occupation and siege continue to impose restrictions on Gaza patients and their medical providers for access to diagnosis, to treatment, and to education, that the work of [the Fund] will be needed.”

The Corries described the situation Rachel encountered during the time before her death, and lamented the conditions of war in which children in the region were forced to live. Craig talked of Rachel’s work with area youth, and a memorial soccer tournament that had been established in her honor.

“We can help give the children better lives, and see that those kids have the same sort of life that Cindy and I wanted for Rachel, that we want for our grandchildren, and that you all want for your children and grandchildren,” Craig concluded before Fund representatives solicited donations.

The Fund had a goal of raising $49,900 to purchase equipment for the intensive care unit currently under construction. Though falling short, the group reported that it raised $48,000 over the course of the evening, surpassing last year’s $40,000 total.