With the blood money battle between the GOP's wealthy Lincoln Club and big labor all wrapped up in San Diego's fourth city council district, one of San Diego's poorest, it's time to pay the piper. 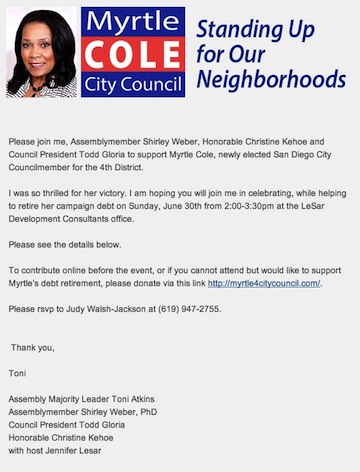 Though a final campaign spending tally for the epic battle between labor and capital - with plenty of city hall special interests along for the wild ride - must await financial disclosure reports due at the end of July, most insiders think the Democrat on Democrat contest, featuring union favorite Myrtle Cole against developer and U-T San Diego backed Dwayne Crenshaw, easily set a new money record.

On the other side of the bitterly fought contest, the labor unions' San Diego Works!, an independent expenditure committee, tapped money sources including the United Auto Workers Region 5 of Pico Rivera; the California Federation of Teachers; and the American Federation of State, County, and Municipal Employees.

Cole and Crenshaw also had their own committees. As Dorian Hargrove reported here, each was sanctioned by the city's ethics commission for soliciting money from city employees at their city hall email addresses.

The costly campaign was also notable for the hit pieces both sides launched at each other.

Host of the event, says an emailed invitation signed by Atkins, is Jennifer LeSar, spouse of Atkins and a former member of the city's now-defunct Centre City Development Corporation board.

The venue for the fundraiser is the office of Lesar's firm LeSar Development Consultants, which has long played a big role in downtown homeless politics and whose client roster has included CCDC and the San Diego Housing Commission, along with the Corky McMillin Companies, according to the company's website.

LeSar Development Consultants also is coordinator for the ambitiously titled Campaign to End Homelessness in Downtown San Diego, according to that effort's website.

It is a sad comment on both our society and our local Leadership that those that promote for the City's homeless make all the really big bucks while the homeless in San Diego don't even have public restrooms in every Council District.

Our current election system really only benefits those that support each others projects and/or all those that line up to be their cheerleaders, in $an Diego's version of Follow The Public's Money to fame and glory.

Left unmentioned in this great story, is that at this fund raiser will be not 1, not 2 but 3 current or Ex-Council District Three Councilmembers (Ex-State Senator Chris Kehoe, Assembly Majority Leader Toni Atkins and SD City Council President and City Councilman Todd Gloria) that have all supported each other politically.