Daughter testified in murder case against her father today

Iraqi man is accused of killing his wife, who wanted a divorce

Kassim Irzoqi Alhimidi made an emotional outburst today when his 18-year-old daughter entered the courtroom to give testimony. The judge almost halted proceedings before defense attorney Richard Berkon could speak to his client.

Fatima told the court that she is the eldest of five children by 49-year-old Kassim and her 32-year-old mother Shaima Alawadi, and that she was the one who discovered her mother’s bloody body the morning of March 21, 2012.

Fatima said she was awakened that morning by a small noise, “I kinda heard like a squeal.” Fatima said it was short and fast, “I thought like my mom was cooking and she touched something hot.” Fatima went back to sleep, in her upstairs bedroom, and was next awakened by the sound of glass shattering. “It sounded like a glass breaking.” It was after 11 a.m. when Fatima finally got out of bed. “I was hungry, so I went downstairs to have some breakfast.”

Fatima found her mother on the kitchen floor, tangled in a chair and computer wires, in a pool of blood. “I was in shock.” She phoned 911.

A sliding glass door at the rear of the home was found shattered, and forensic experts were unable to determine if it had been broken from the outside or inside, according to testimony today.

Fatima said that neither of her parents worked, but if her father “got a phone call,” he would leave home with a certain box that was filled with dates (the fruit), which he sold on demand.

“Yes, my mom wanted a divorce from my dad,” the pretty young woman told prosecutor Kurt Mechals. “She told me.” Not long before her fatal beating, Shaima Alawadi drove to a courthouse and got the legal paperwork to begin dissolution proceedings, while her daughter waited in the car, Fatima said. Was her father aware of this? “Yes, she showed him the papers.”

Fatima said her mother was planning to go to Texas, to spend time with her brother there, but was beaten to death just days before she was set to leave.

A county medical examiner testified that Shaima Alawadi was killed by blunt force trauma of her head and face.

Fatima’s father said that he threw two items from his van as he drove around the same morning that his wife was killed, the daughter revealed today. Fatima said those things were “shoes” and a “metal thing.” Her father explained to Fatima and her eldest brother that he was fearful police might become suspicious of him.

Alhimidi was arrested in November 2012. He pleads not-guilty to first-degree murder through his private attorney Richard Berkon. 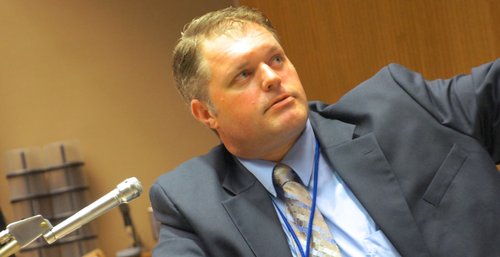 This is the same daughter that got on TV right after the murder and blamed it on racism! Am I the only one that remembers her performance?

You're right! She was on the tv blaming it on racism because some wise guy tried to divert attention elsewhere by leaving behind a note that said something to the effect of, (I'm paraphrasing here) "My country, not yours, get out." Do you remember that?

Now that you two mention it, that was the story. Maybe she actually thought it was true at the time. (She still may think so.) Her testimony as described here was not accusatory, just factual. Looks as if you can take the boy out of Iraq, but you cannot take Iraqi out of the boy.

Here is an evidence photo of the note that was found on the floor, in the center of the room, about then feet from the beaten woman, according to the first paramedic on scene. 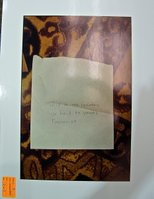