"Tourism Marketing District (TMD) funding for the San Diego Tourism Authority has been greatly reduced this year, resulting in many layoffs at the Tourism Authority," says Jerry Morrison, hotel expert in Encinitas. "This will negatively impact San Diego's convention business for years to come."

So why are San Diego's leaders in such a hurry to expand the convention center? (That's my comment, not Morrison's.)

Superficial pursuit of a sociopathic narcissist

As I Lay Dying, Trishes, Cultgabe, Bloodstone the Street Preacher, Ashes of Fate

"Tourism Marketing District (TMD) funding for the San Diego Tourism Authority has been greatly reduced this year, resulting in many layoffs at the Tourism Authority," says Jerry Morrison, hotel expert in Encinitas. "This will negatively impact San Diego's convention business for years to come."

So why are San Diego's leaders in such a hurry to expand the convention center? (That's my comment, not Morrison's.)

The U-T reports that TMD CEO Joe Terzi, like others at the organization, will have to take a 20% pay cut. So Terzi, at $370K a year will now make only $296,000? Oh, boo hoo. Maybe he can drive in his new Mercedes over to the San Diego Food Bank for groceries! Why doesn't he voluntarily cut his salary to $100,000, and match the mayor's pay? That would save a few jobs at TMD. 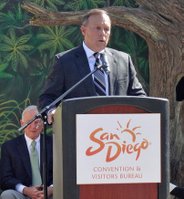 dwbat: Good point. And I repeat another question I have asked: if TMD cuts will slice convention center attendance for years to come, what is the hurry to go ahead with the expansion, which is egregiously unwise anyway? Nationwide, convention center attendance has been dropping over the decade while convention center space has been growing sharply. The result is a glut and centers slicing prices, and some, such as San Diego, cooking the books to look better. Unfortunately, though, when the business community wants to rob the taxpayers' pockets, and Big Labor gets a sweetheart deal, there arises a political juggernaut that is well nigh unstoppable. Best, Don Bauder

Don: You speak of slashing prices--notice that Comic-Con itself has received a break on their rent since 2009. This year, Comic-Con should have paid $479535 but got a discount of $290610, ending paying only $188925. It gets even better (for them) the next 3 years, paying a flat rate of $150k for each of the next 3 years. (Thanks to the U-T, July 17th, for those numbers) I would assume that the convention center won't be expanded by 2017 (at least I hope not), so I would assume to keep Comic-Con here, they will probably end up getting free rent be then.

aardvark: You are very alert. That is extremely helpful information. Probably whoever put these truths in the U-T is filling out job applications for out of town positions. Best, Don Bauder

There is one thing that nobody has mentioned so far. San Diego has more recently become a regional attraction, and even the tourism cabal boosters mention this, meaning that it attracts heavily from the region and not so much outside. That means (for those who don't grasp "regional") most of the visitors come from within So Cal. And that translates into LA and OC and Riverside counties. How do they get to SD? Being "regional" most do not fly in, and while Amtrak does a bang-up job, most do not arrive by rail. Uh, no, it's the car. Well, for the past five years or more, I-5 jams up southbound from mid-day Friday until late evening, and that happens again on Saturday. And it happens year-round, not just during racing season, or during the Fair, or summer only. (That jam up starts north of Oceanside and lasts as far down as Cardiff.) Every weekend, winter or summer, rain or shine, holiday or not. Oh, and then the process reverses itself on Sunday, with a backup in North County that stretches for miles.

Might it be possible that those freeway jams are discouraging visitors? And if that is the case, maybe they're not coming in droves to fill up the many, many overpriced hotel rooms, and head to the overpriced tourist attractions such as the Zoo, Safari Park, Sea World, and so on. Certain segments of the SD economy have tried to live on tourism and be damned with anything else for decades. Now the old model is working even less effectively that ever. Time for a new economic model for SD? Or is the problem that the freeway needs another lane from LA all the way to downtown San Diego?

Visduh: Very good points. San Diego has always depended on the so-called "drive" market for tourism -- particularly L.A. and Arizona. Maybe the traffic is discouraging this business. Don't say that too loud, though, because SANDAG might want to build more highways, which is exactly the wrong thing to do. Even LA realized that the more it built expressways, the more it was encouraging sprawl, and worsening jammed freeways. Best, Don Bauder