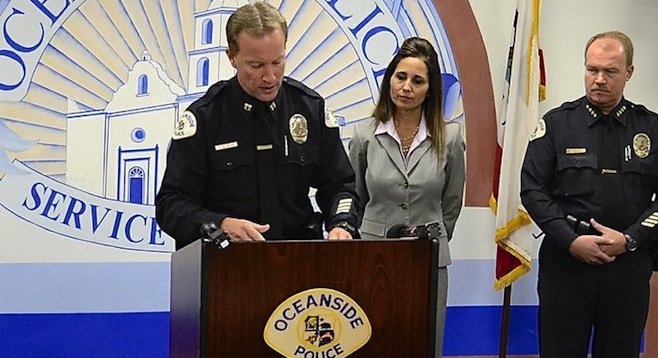 In other San Diego graffiti news….

Oceanside police can smell the paint

When police asked the young man why he was walking down the street after midnight carrying those cans of spray paint, he reportedly said, “I’m an artist.” One officer wondered where he did his art, and the man allegedly replied, “All over.”

This according to officer Robert Moore, a seven-year veteran with the Oceanside Police Department. Moore is currently tasked with graffiti abatement, trying to stem the rise in “tagging.”

As part of a Neighborhood Policing Team, officer Moore said, “I am familiar with the tagging crews in the areas of Oceanside, Carlsbad and Vista.” These communities are all in Northern San Diego County.

In a report dated two weeks ago, Moore said officers Ewing and Dominique were in an unmarked OPD patrol vehicle a little after midnight, on June 7, 2013. The officers were working gang suppression when they noticed graffiti sprayed across 400 feet of brick wall on Douglas Drive. Some of the fuzzy letters were six feet tall and ten feet wide. Those officers said they had passed the same area two hours earlier, and they were certain that graffiti was not there earlier.

There was still “spray paint odor in the air” and the black paint was still damp, officers noted. They found an empty can of black Rustoleum spraypaint at the base of the wall. (Field technicians later lifted a palm print off that can.)

“Officer Ewing observed two males walking north on Douglas Drive,” the graffiti specialist reported. One of the pedestrians was “wearing a backpack in front of his body.” Officers said he identified himself as 20-year-old Lee Bennett.

When cops asked why he had four cans of Rustoleum paint in the pack, they said Bennett told them, “I’m an artist.” Then cops inquired where he did his art, and they claim Bennet replied: “All over.” Officers said they could see “what appeared to be black paint on the tip of his right pointer finger.”

The other man identified himself as 18-year-old Justin Miles, according to officers. Miles was asked to explain the silver Sharpie marker found in his pocket. He reportedly said it was for “artwork on his skateboard,” although officers noticed that neither young man carried a skateboard.

Because they did not observe a crime, the officers did not believe they had probable cause and no arrest was made that night. The cost of removing the fresh graffiti found in the area that night, which included more locations, was approximately $4,900, according to OPD.

Using the police department's computerized graffiti tracking system, officer Robert Moore believes that Bennett and Miles are “the prolific taggers known as ONEST and SIRE.” He further suspects the two are part of a tagging crew that puts up the scribbles SR and SRK and SRC, he stated in a sworn affidavit.

The police computers contained evidence of sixty separate defacements, using those initials in graffiti, since March of 2013. Because of the similarities, “In my opinion the graffiti is nearly identical and done by the same persons,” officer Moore stated.

The cost of removing all the documented graffiti was estimated to be “in excess of $24,000.”

Although the vandalism was found “throughout the entire city of Oceanside,” many of the markings were only a short distance from the residence of Lee Bennett’s mother. (Michelle Mahoney lives in Park Circle Condo Community on Half Moon Bay Way, according to police.)

It does not appear that any charges have been filed in this case, as of July 3, 2103.

The new graffiti tracking software is going to put these kids in the slammer.....

All of those observations that were made, and it didn't add up to probable cause? If that was not probable cause, what is? Well, this is Oceanside and their PD has about the worst record in SD County for messing up (which is saying a whole lot) all kinds of investigations, plus internal dissension. The cops should have put them in the slammer when they made the encounter.