Back in January 2008, the region's GOP kingpin got together with some friends and associates and sought to establish the Manchester Financial Bank, filing a request for a charter with the U.S. Comptroller of the Currency. 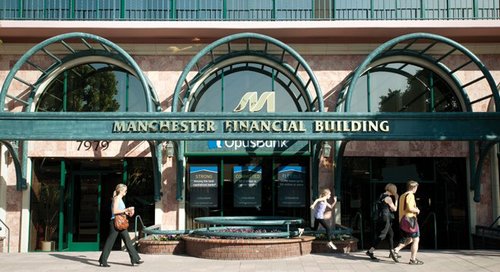 Professional banker Frederick J. Mandelbaum, a past member of the Housing and Community Development Advisory Committee for the County of San Diego, was set to be the bank's C.E.O. and run its day-to-day operations.

But after the crash of 2008 Manchester backed out of the deal and the bank never got off the ground.

Now a federal judge in Austin, Texas has ordered the wealthy La Jollan's bank that wasn't to fork over some heavy pocket change to a vendor which alleges it got stiffed.

The long-running legal tale, involving a deal by Manchester with an outfit called 21st Century Financial Services to provide electronic banking services, is laid out in a "Findings of Fact and Conclusions of Law" signed by judge Lee Yeakel in March.

On October 8, 2008, Mandelbaum emailed Scott Davis of 21st Century stating that although the bank "had received FDIC approval to move forward," the bank's principal investor, Doug Manchester, "decided not to move forward based on the current financial turmoil."

Though there was no dispute that 21st Century had done all of the work required of it in its contract with the bank, writes Yeakel, Manchester and company wouldn't pay its bills.

21st Century took the dispute to arbitration, as provided for in its contract with Manchester, writes the judge, but the arbitrators had trouble getting in touch with the mercurial mega millionaire.

A preliminary hearing was held on September 14, 2009, at which Manchester Bank failed to appear

On November 5, 2009, Summer Wynn of the Cooley Law Firm forwarded a letter of the same date ... stating that "the proposed Bank is merely a proposed entity that never came in to existence, and to our knowledge, has not been properly served with Claimant's Demand."

More letters and notices were dispatched to Manchester and his minions advising them of the final hearing, but to no avail.

Despite these communications and numerous notices and emails ... over several months, neither the Respondent nor its representatives appeared at the hearing on January 13, 2010 in Austin, Texas.

Although Manchester Bank did not participate, the arbitrator did not enter a default award, but required 21st Century to present evidence and testimony in support of its claim.

When Manchester failed to ante up, 21st Century went to federal court in Austin, where the La Jollan's legal team finally turned up to argue their case.

Manchester Bank seeks to have the Arbitration Award vacated on two theories: the bank "never received notice of the arbitration," and the arbitrator exceeded his powers by not finding that the parties first attempted to negotiate in good faith prior to invoking arbitration.

Regarding the question of notice, the court wrote:

Douglas Manchester later confirmed receipt of both the demand letter and the notice through its communications with the [American Arbitration Association] and 21st Century before the date of the arbitration.

Yeakel also dismissed Manchester's second argument and confirmed the arbitration award against him, issuing a final judgment on March 22. In April, Manchester moved for a stay of the judgment, which Yeakel denied on May 21.

The matter is currently at the beginning of what may be a lengthy appeals process.

Lawyers for 21st Century tried to go after the money by registering the judgment against Manchester's bank with the federal court in San Diego, a move opposed by Manchester attorneys, who wrote last month:

Registering judgment in the Southern District of California during the pendency of the Bank’s appeal is nothing more than 21st Century’s groundless attempt to prematurely harass individuals who were never parties to the arbitration agreement at issue, and who are non-parties to this Court’s judgment.

We have a call into Richard V. Gibbons, Manchester Financial Group's vice-chairman and CEO, for more details.

The matter is currently at the beginning of what may be a lengthy appeals process. He may win on appeal, based on lack of service, MAY being the operative adjective, but if he loses he Is going to owe boatloads more due to the compounding interest.....

Interesting. So, 21st Century did the work but Manchester is refusing to pay for that work?