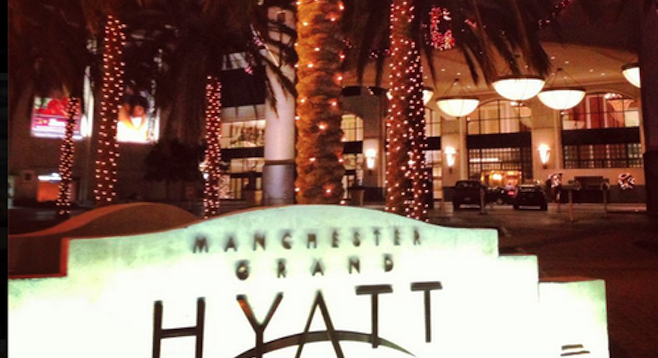 At the Manchester Grand Hyatt: Break it or not you pay.

Employees at the Manchester Grand Hyatt have to abide by a simple rule: If you break it, you buy it.

But according to some former room service employees the policy is slightly more nuanced. For them, even if they don't break it, they still have to pay for it.

In a new lawsuit, one former room service worker claims that all workers are forced to fork over a percentage of their tips to pay for broken drinking glasses, regardless whether they broke a glass or not.

On December 20, Chula Vista resident, Leonardo Acosta, who worked room service at the hotel from 2003 to 2011, filed a class action lawsuit against Manchester Financial Group and the current owner of San Diego's Grand Hyatt, Host Hotels, for witholding a fixed portion of all gratuities to pay for broken glasses.

"The same percentage of gratuities was withheld from all room service delivery workers in Plaintiffs' tip pool, without regard to the amount of breakage, if any, during any pay period," reads the lawsuit.

"The same percentage of gratuities was withheld from all room service delivery workers in Plaintiffs' tip pool, without regard to whether any purported breakage was caused by any dishonest or willful act, or by the gross negligence of any employee."

The lawsuit, filed by the law firm Faruqi and Faruqi out of Los Angeles, claims the hotel's policy violates the California Industrial Wage law which states that "no employer shall make any deduction from the wage or require reimbursement from any employee for any cash shortage, breakage or loss of equipment, unless it can be shown that the shortage, breakage, or loss is caused by a dishonest or willful act, or by the gross negligence of the employee."

The policy is said to have in place before 2003 and remained after "Papa Doug" Manchester sold the hotel to Host Hotels in May 2011.

It would be interesting to know if at the same time they are charging the employees for breakage they are deducting it as a loss on their tax returns.

That's a great question. I'll look into it. It may be difficult because the sale took place in 2011.

Now they are denying it, but does that mean they are denying that it took place earlier? If an employee were seeing such deductions, that would have a paper trail of some sort, and a request for discovery would soon reveal the truth. Personally, I'm inclined to believe the plaintiffs. Some of the employers in this so-called "hospitality industry" can be most abusive and demanding, while paying peanuts.