Edison’s costs thus far include $102 million for inspection and repair of defective steam generators, one of which leaked a small amount of radioactive steam in January 2012, leading to the shutdown. Another $300 million has been spent on acquiring replacement power from other sources.

A warranty provided by Mitsubishi Heavy Industries, the generators’ manufacturer, caps their liability at $138 million. So far, Mitsubishi has paid out $45 million of the $104 million in claims submitted by Edison.

Despite the problems at San Onofre, Southern California Edison still posted a 2012 4th quarter profit of $2.56 a share, as reported February 26, though it was offset by another of parent company Edison International’s businesses, Edison Mission Energy, which booked a $4.07 per share loss. The losses actually represent an improvement over previous quarters, however, and Edison’s stock rose from $46.09 at yesterday’s open to $47.14 as of midday February 27. 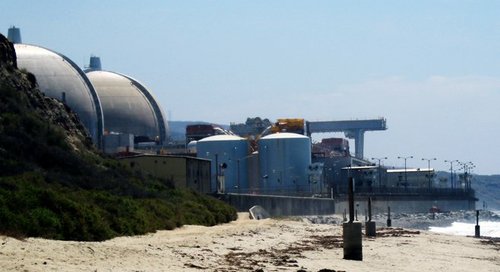 To this $402 million for repairs and replacement power, one has to add the $739 million which Edison collected for SONGS as part of its CPUC-authorized 2012 "revenue requirement" for SONGS, as well as the $253 million collected by SDG&E as part of its CPUC-authorized 2012 "revenue requirement." $1.396 billion for one year's worth of an inoperable plant starts to make it clear why Southern California electricity bills are so high.

Somebody scraped off the Obama/Biden bumper sticker from my car earlier this week, so I'm replacing it with a bright yellow message with a drawing of "The Scream" that reads "SHUT DOWN SAN ONOFRE." Plus, I want a refund.