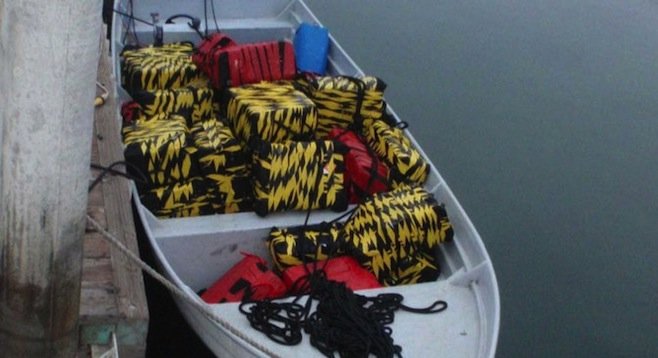 A panga boat, which originated in Mexico, was stopped 12 miles southwest of Laguna Beach with over $4 million worth of marijuana on board on Tuesday, August 6. According to Customs and Border Patrol (CBP) officials, the small sea vessel was first spotted off the coast of La Jolla by an air unit while traveling northbound.

When CBP agents caught up to the boat they discovered 119 packages of marijuana being transported. Two male Mexican nationals were apprehended. Agents estimated the value of the marijuana at $4,105,000.

CBP officials may have to spend a good deal of time testing small amounts from all 119 packages, just to make sure it is real. Extra shipments of snacks have been shipped to CBP headquarters to assist officials who have to conduct this official investigative work. It's a tough job, but someone has to do it.

It seems highly unlikely that some drug cartel is going to put $4 million of weed on one small boat, and trust to luck. (Such exactitude in the valuation! We science folks call that degree of accuracy "four significant figures".) Methinks that value is some sort of puffed up estimate of the so-called "street value" of the stuff. With all of the grass being grown in the US, and in California in particular, why do these south-of-the-border growers keep sending massive quantities of it north? Only one conclusion can be reached: many, many users are using it in large quantities. We have one California county (no name) that now concedes that its greatest crop, and greatest economic sector, is weed growing. If that were to go away that county, already struggling from loss of any number of other industries, would be in even more serious condition. Strange and screwy, isn't it?