Harvey Berger filed a motion on August 6 to move the case from San Diego County due to the media frenzy surrounding the case.

"A change in venue is necessary because publication of the allegations of sexual harassment against Mayor Filner have been so widespread, unrelenting, intense, and outspoken that there is reason to believe that an impartial trial cannot be had in San Diego. Thus, Mayor Filner seeks to have venue transferred to nearby Imperial County."

In addition to concerns about the venue, Berger says attorneys for the City, as well as Gloria Allred, purposely scheduled Filner's deposition while the he was receiving treatment.

"I responded to Mr. Cordileone stating, again, that Mr. Filner is not available for deposition on August 9, 2013 because he will be in a full-time treatment program during the two-week period from August 5-16. I told Mr. Cordileone that Mayor Filner would make himself available after he returns from treatment and asked if he would withdraw the subpoena..."

Cordileone from the City Attorney's Office rejected the request. On July 26, the chief deputy attorney responded with the following email:

This is to let you know we just served a deposition subpoena on Mayor Filner for August 9, 2013, It is the one we served on your office yesterday. I gave the instruction to personally serve him because it would be difficult if not impossible to compel his attendance or seek sanctions for his non-attendance if the only service we had was a deposition notice to his attorney in a case where neither he nor his attorney has appeared.

I regret to say that I cannot extend to you the customary professional courtesy of an extension of time on the date for the deposition. I gather from the message you sent yesterday afternoon that you intend to object to the deposition subpoena. My client requires formal notice of the basis for your objection. This is because any delay will cause additional damage to the City.

The Mayor is quoted in the paper as having said: "Let us get this into a process where everybody, including myself, has a way to make a fair statement, to talk about their view of things, and there's an Impartial Investigation and discovery Let's take a deep breath and let that process work itself out. Meanwhile, we'e got a city to run."

His deposition is a key part of the process lie will have an opportunity to make a fair statement, and until we hear from him. it is nearly impossible for anyone to run this City. His absence during this critical period does no one any good. If you intend to seek an ex parte order shortening time for a motion to quash, just let me know when we need to make our appearance and get me your moving papers as soon as you can.

Accompanying Berger's motion is a brief, heavily redacted letter from an unnamed psychologist.

"To Whom It May Concern;

Robert Filner is currently under my care in an intensive treatment program and will be unavailable for deposition on August 9, 2013.

The lawyers will appear in court tomorrow to discuss the motion to change the venue and setting a new date for a deposition.

This worthless lawsuit is an excuse to open up the Mayor's sex life to scrutiny. The deposition is out of the Ken Starr smear playbook. They hope to manufacture a perjury charge by trawling for barely relevant salacious information on Filner's love life.

Choosing Imperial County over Orange County is a smart move by Filner's team, his pursuers will choke in the dust in their off hours rather than visit Disneyland with the kids.

Considering the number of failed "hit ons" it would appear that the mayor doesn't have ANY sex life. Thus the reason he is so frustrated and disagreeable.

Tired: Perhaps the others have no complaints.

Does Filner think they don't have news in the Valley? Even people in Maine and Puerto Rico have heard about him. Moving the trial would be a waste of money, unless Filner is offering to pay for it personally.

I agree that the media firestorm makes it difficult for him to get a fair trail. Both plaintiff's attorneys might well be ruining their case by engaging in deliberate jury tampering. A judge might toss out the whole suit for that reason.

Psycholizard: As has been intimated before, is it possible that the plaintiffs's attorney does not want a trial, and is hoping by upping the ante on a daily basis to coerce a resignation from the mayor instead? A real trial might be the defense's attorney doing some upping the ante himself.

I actually don't have an opinion on this; it is a genuine, not rhetorical question.

Harvey Berger might want to consider a county with fewer biker types. Imperial is loaded with bikers (especially Christian ones), and Filner's latest offended lady is the modest biker/marketing guru Pink Biker Chick Eldonna. Eldonna's services are for hire at http://www.pinkbikerchic.com/. Maybe Filner should just hire her.

According to CNN, she met Filner; he called her later and referred to seeing her give a speech. Maybe this one? She got wolf-whistles. She could claim that was Filner whistling. Disgusting!!!

On CNN, she played a voicemail saying "Hi, it's your newly favorite congressman, Bob Filner. You know, the one who fell in love with you at your last speech. I don't want to wait 'til you come back to have dinner with you." 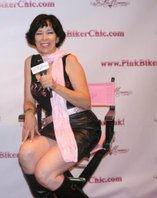 His choices were Imperial or Orange Counties.

Doesn't matter where they hold the trial. Based on the evidence we know about so far, and without ever knowing what a jury will do, the mayor will win.