Did Sanders violate "cooling off" ban on Filner Mexico trip?

Back in December 2010, when Kris Michell - then chief of staff to San Diego Republican mayor Jerry Sanders - departed for the greener pastures of a special interest group called the Downtown San Diego Partnership, she was handed an eight-page advice letter from the city's ethics commission barring her from lobbying anyone at city hall for a year: 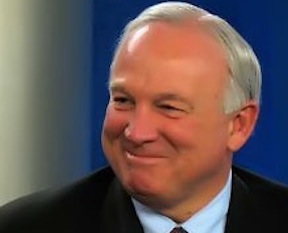 Moreover, you may not lobby (outside of a public hearing) any City Officials during the one-year post-employment period on behalf of DSPD with regard to any other types of municipal decisions.

So where does that leave Michell's ex-boss, former San Diego mayor Jerry Sanders, the new head of the San Diego Regional Chamber of Commerce, who just got back from a trip to Mexico City with his successor Bob Filner?

According to an account in Sunday's U-T San Diego, the Republican made direct, apparently non-public contact with his Democratic replacement:

“He and I are the only two that have ever had the strong-mayor job so there’s not really a big group of people you can go talk to about it,” Sanders said.

“I think that he feels now how large it is and he’s understanding a lot of the issues so I think it’s a learning process.

According to the December 16, 2010 letter of advice from the city's ethics commission to Michell, signed by commission program manager Stephen Ross:

“Influencing a decision” means “affecting or attempting to affect an action by a City Official on one or more municipal decisions by any method, including promoting, supporting, opposing, participating in, or seeking to modify or delay such action.”

It also includes “providing information, statistics, analysis, or studies to a City Official.”

These prohibitions will remain in effect for a one-year period following your separation from the City.

So did Sanders step over the influence line?

The matter is legally complicated enough to provide a field day for political defense lawyers:

There are two prongs to the City’s post-employment prohibitions: the project ban and the cooling off period.

The “project ban” prohibits former City Officials from communicating (or helping others communicate) with current City officers and employees on behalf of a new employer with regard to projects they worked on while with the City.

The “cooling off” period prohibits former City Officials from lobbying current City Officials for the purpose of influencing all types of municipal decisions on behalf of a new employer.

The chamber of commerce, which is registered as a lobbyist with the city, has a considerable influence agenda, according to its most recent disclosure statement, covering the first quarter of this year, filed this morning and posted online by the city clerk's office.

Signed by Leah Hemze, the group's acting executive director of public policy, the filing shows a broad advocacy reach, including support for the controversial effort by the city's big hotel moguls to force Filner to sign the so-called Tourism Management District funding contract; an unspecified "Infrastructure Initiative"; the San Ysidro port of entry infrastructure project; and "small business regulatory reform," including relief for "those with sidewalk cafes."

In response to a request to talk to Sanders, a chamber staffer said this morning that the ex-mayor was "pretty well booked up this week," and not available for comment.

The staffer, who did not want to be quoted for attribution, maintained that the ex-mayor's conversations with Filner were general in nature and that Sanders had therefore made no illegal contacts with the current mayor during their Mexico trip.

$ANDER$ is above the law and he knows it, if you don't believe me just ask him....

Well, I guess the only 2 people who actually know the truth are Sanders and Filner. I would say that , being a Dem, Filner would have no problem making it known if Sanders actually acted as a lobbyist. From my reading of the above article, it seems that there has been no comment from Filner as of yet. But I think bigger question needs to be asked. Reminds me of the M Douglas role in An American President and the scene in which he tells Annette Benning that as a lobbyist, she would never be alone with the President. So, if Filner had even a notion that Sanders was acting as a lobbyist, why would Filner even be in the same room as Sanders? Either it was as innocent as the Sanders machine claims, or your new mayor had a very serious lapse in his professional judgement.