Garritsons are a family of nurses, the son testified

Adult nurse sons testify in jury trial of their registered nurse father, who is accused of abuse

Jarrod Garritson was subpoenaed to testify in the trial of his father, on April 16, 2013.

Jarrod looked at Michael Dale Garritson, 62, sitting at the defense table and said, “He’s my father.” The elder Garritson is accused of abusing an autistic patient in his care, last summer.

Jarrod Garritson said he is also a Licensed Vocational Nurse. He said he was assigned to “home health care” of James Gilbert, an autistic man and alleged abuse victim, through an agency called the San Diego Regional Center.

Jarrod Garritson was a caregiver for 23-year-old James Gilbert during the same timeframe that his father was caring for the same patient, July and August of 2012.

In the witness box, Jarrod said this severely disabled patient was not able to speak nor make his wants understood at all. “There’s zero communication.” Jarrod understood that “Jamey” was diagnosed as extremely retarded and severely autistic and epileptic.

And Jamey hurts himself, Jarrod told the jury. “This person will violently punch himself.” Jarrod said he witnessed Jamey using both fists trying to violently strike himself on his own head, he described it as a “one-sided boxing match for hours.” He said some of the results are permanent. “He has teeth missing. He has boxers’ ears.” Jarrod described them as “cauliflower” ears.

Jarrod said it was especially difficult to contain Jamey when he was hitting himself because, “He learned how to bite.” Jarrod said the tall, young patient “got wise to the idea” that if he bit people trying to restrain him, they would let go. This is especially worrisome because Jamey has MRSA, described as “a bacteria on the skin that can cause a severe infection” and is resistant to antibiotics.

The disabled man’s mother told Jarrod she specifically wanted male nurses for her son because of his “self-injurious-behavior.” Jarrod agreed, “He’s that strong.” Mrs. Kim Oakley described her son as “Gumby on steroids” because he is so flexible and agile at escaping restraint, Jarrod testified.

Another nurse in the Garritson family, named Blake Garritson, also worked for Mrs. Kim Oakley. Blake Garritson took Jamey to an adult daycare facility during the day, and they returned to the Oakley home in Valley Center at the end of each day.

Jarrod claimed that during the twelve-hour overnight shifts, typically 7 p.m. until 7 a.m., Mrs. Kim Oakley wanted nurses to keep Jamey in his room. “You’re not supposed to leave the room because she gets angry,” Jarrod told the jury. He said Mrs. Kim Oakley complained of the noises Jamey would make, and she said her family needed “respite.” (Mrs. Kim Oakley disputes this.)

In July and August of 2012, mother Kim Oakley went away to Europe for a month.

“I made sure I did not take any time off that whole month,” Jarrod told the jury. “I am responsible to stay with my patient.” Jarrod said he loves his work as a nurse and that he cares about his “clients.” Jarrod said, “I don’t believe in abandonment.”

The Oakley home in Valley Center does not have a cooling system, Jarrod said. “There’s no AC” and “It’s a hundred degrees in the summertime.” Jarrod recalled that his damp shirt stuck to his body, he was wet with sweat during his long overnight shifts. Jarrod said he often asked for air conditioning for the uncomfortable room, and he finally brought in a small floor fan himself.

Jarrod was asked to watch a video clip of his father caring for Jamey that summer. “It looks like my dad grabbed his head,” Jarrod told the jury. “You notice that the SIB stopped.” Jamey hitting himself was called Self Injurious Behavior or SIB by the nurses. “You learn tricks on how to stop a SIB.”

Jarrod said it was important to stop Jamey hitting himself quickly, “or it would escalate.”

Mrs. Kim Oakley has accused two of her paid caregivers of badly handling her 23-year-old autistic son. She gave the San Diego District Attorney’s office thousands of video clips; those were taken with a surveillance camera installed in her son’s bedroom shortly before she left last summer. Mrs. Oakley was the only witness during the first two days of trial; this began last week, on April 8, 2013. 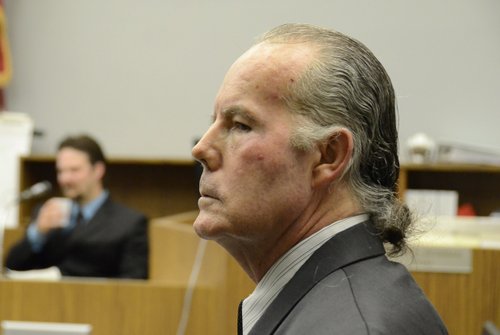 This trial will get even stranger before it is over. These revelations of the parties involved are almost too much to believe.

We live in such a litigious society. Sounds like caretakers/LVNs have a pretty tough job.

Hmm. I wondered when those comments would be removed.