Yesterday saw a handful of new developments in the push to align voters either in favor of or against Proposition 37, a measure that would require food producers who knowingly use genetically modified crops to label them as such, and prevent such producers from referring to their products as “natural.”

Women Occupy San Diego, one of the lasting and perhaps most prominent local groups to emerge from the Occupy Wall Street movement that began one year ago yesterday, organized a rally at the Hillcrest headquarters of Canvass for a Cause on Monday afternoon.

Several speakers decried the potential health impacts from genetically altered products, noting that the products have been shown to contain increased levels of allergens and that modified crops, marketed by chemical giant Monsanto as “Roundup-ready,” are treated with considerably higher doses of herbicides, as the seeds have been engineered to resist the effects of the company’s signature weed killer, allowing farmers to douse their entire crops at will to control weeds. 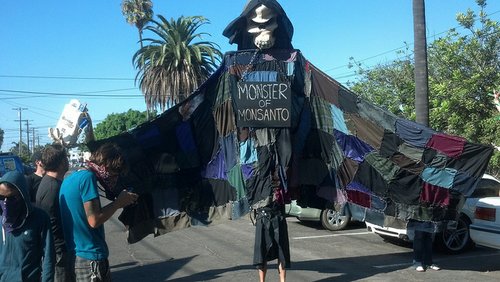 The Occupellas, a chorus group featuring members of Women Occupy, sang familiar yet re-branded tunes such as “Old Monsanto Had a Farm,” and a crew of demonstrators arrived with a large “Monster of Monsanto” prop that accompanied the crowd, which had swelled to over 100, as they marched toward the SR-163 overpass at Robinson Avenue.

Original plans had called for a second group of protesters to demonstrate on the bridge crossing University at the 163, but as of shortly after 5 p.m. only one bridge was occupied. Several police cruisers stood by to survey the action, but neither the demonstrators nor members of the public seemed inclined to violence. 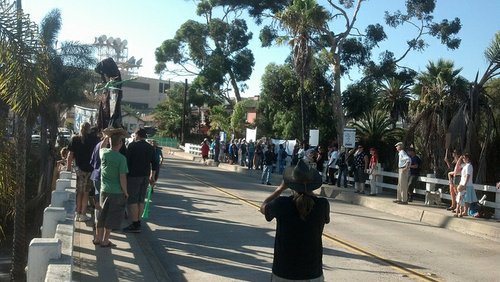 Meanwhile, backers and detractors of the Prop 37 campaign sent out dueling press releases.

The Yes contingent seeks to draw attention to new funding received by its opponent, information made public by the state last Friday. Monsanto gave the No campaign another $2.9 million, raising its total stake in defeating the proposition to $7.1 million. Other pesticide companies recently upped their investments, including DuPont ($874,800), Dow AgroSciences ($815,200), Bayer CropScience ($381,600), BASF Plant Science ($357,700), and Syngenta ($178,700).

These groups, which measure proponents are calling the “Big 6 pesticide firms” have contributed $19 million of the $32 million raised so far by those opposing the proposition.

Opponents of 37 didn’t leave long to question where the influx of cash would go, announcing a major buy of radio ads to be aired statewide beginning yesterday.

“Prop. 37 is about the right to sue,” says California Grocers Association president Ronald K. Fong in a statement accompanying the ad copy. “And when it is time to sue, grocery retailers will be at the head of the line to get hit with a lawsuit. Lawyers need no proof, no damages prior to filing the lawsuit.”

The ad makes similar claims, and also says that the new labeling requirements would “increase food costs for a typical California family by hundreds of dollars per year” while “[giving] trial lawyers a special new right to file shakedown lawsuits.”

The ad closes by advertising “FactsOn37.com,” a website that was not active as of Monday evening, though the campaign website makes many similar claims and links to the study that is the basis of the figure given on higher food costs, finding that the costs of food prices could rise $4.5-$5.2 billion if the proposition is passed, mainly because producers would prefer using non-bioengineered crops to having to disclose their continued use.

“It’s an infinitesimal amount cost per product, but they’re going to say it’ll cost you hundreds,” predicted Jeffrey Smith, a consumer activist and author on genetically modified crops, in a statement about a week before the survey was posted to the No on 37 website. Smith was speaking about the cost of continuing to use the same products while producing packaging compliant with the new law, which producers are widely expected to shy away from due to real or perceived concerns from consumers regarding laboratory-altered food.

While no other U.S. state currently has such a law on the books, 50 countries including China, India, Japan, and all of Europe requires such disclosure.

For openers, just keep in mind that the term "natural" used on foods is meaningless. There might have been a time when it told you something about the food, usually implying minimal processing and not mixing things together, but those days are gone. Refined white sugar, a product of a factory, and most heavily processed, is now called a "natural" sweetener! So, you can consume something that is sugared to the nth degree and find it labeled as "natural." They allow peanut processors to add palm oil to the peanut butter and still call it "natural". (That is put in so that the stuff doesn't separate, as most "natural" peanut butter does. What they don't tell you is that palm oil is highly saturated fat.) And so it goes. There is a need for more honesty in food labeling, as there is a need for a more savvy food consumer.

According to independent legal analysis Proposition 37 has been crafted in a way that provides “greater legal certainty” for businesses than other California consumer disclosure laws. It won’t invite frivolous lawsuits. What it will do is help California consumers make more informed choices about the food they eat.

This is not about "the right to sue" as the California Grocers Association claims. This is about the right to know what's in our food and be able to make a choice as consumers whether we want genetically modified food. The majority of industrialized nations require GMOs to be labeled and studies have linked GMO corn to organ failure in rats.

There are so many reasons to label GMOs and only big corporations that are profiting off us not knowing what we're eating and not wondering "what's a GMO".