A new report from the California Budget Project, a group that “works to improve public policies that affect low- and middle-income Californians,” suggests that the vast majority of the additional tax burden that would be placed on state residents should Proposition 30 pass would be absorbed by the state’s wealthiest one percent of residents.

The combination proposal to raise sales and income taxes is a hybrid of the so-called Millionaire’s Tax and a proposal by Governor Jerry Brown, whose backers joined forces to reduce new tax measures from three to two. A separate proposal, Proposition 38, focuses on income tax increases alone. Both focus the majority of new revenues on shoring up education spending statewide.

Overall, nearly 80 percent of the projected income generated by the new taxes the proposition seeks would come from the highest earners in the form of income tax hikes.

California Budget Project justifies its support for the measure through research that it says finds the top-earning one percent of Californians saw their incomes rise 82% between 1987 and today, while the bottom 80% of earners are bringing home smaller paychecks after inflation is considered.

Want to see what the California Budget Project is missing from their Proposition 30 analysis? Click below.

Why does the CPB analysis ignore Proposition 63? How does that affect California's tax rates.

How do California's existing state SALES TAX rates and Proposition 30 tax hikes compare to state sales tax rates in the other 49 states?

From whom does California derive most of its income tax revenues?

Whose incomes dropped the most, and consequently their taxes, after the 2008 subprime mortgage crisis?

How do California's tax rates affect our business climate?

How does are tax and business climate affect California's unemployment rate?

Who are the biggest funders of Proposition 30? 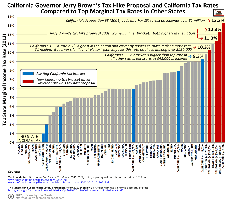 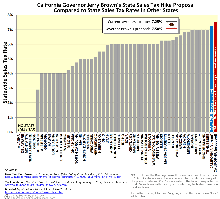 Not surprised david Rice always seem to tow the line for special interests.

The state JUST reinstated redevelopment except now there is even less accountabilty and no blight requirement. oppose SB 1156

the state just set up CA Cap and Trade as an anonymous shell corporation to avoid open govt laws so they can give the 50-100 billion dollars to special interests.

This is how they are writing laws NOW exempting themselves from open govt laws as in no reforms.

How bout that quarter % sales tax hike...pretty sure that falls on ALL of us!! Also these hikes are for 7 years. if the dollar crashes or we have inflation a couple making $250k will be middle class at best and we are stuck w/ those hikes. Hell no on tax hikes!!!

Google the city or Hercules. see the story today about the 50 million dollars a politician stole in redevelopment dollars.