The City Attorney, however, did say that he planned to be a "bit more in the forefront" during his second term.

It appears Goldsmith grew sick of waiting for that term to begin.

Today, he announced his endorsement of councilmember Carl DeMaio for Mayor of San Diego.

“Having worked with [DeMaio] during the past four years, I see him as an energetic leader who has been willing to fight for thoughtful and innovative change, but he is also willing to roll up his sleeves and work with others to ensure the city is properly managed on a day to day basis,” said Goldsmith in a statement. “Carl DeMaio has a record of collaboration and a temperament that makes him the best and only choice for Mayor.”

DeMaio, of course, welcomed the news. “Today, I am honored to receive [Goldsmith's] endorsement. As one of the most respected legal minds in our city, [Goldsmith] represents the best in civic government and has a record of public service matched by few,” read DeMaio's statement.

“I believe San Diegans are in agreement with [Goldsmith]: they want a leader who has a balanced approach to governing.”

I cannot respect a person that has a dead squirrel sitting on top of their head.......

SurfPuppy619, Goldsmith hails from Poway & that would be dead raccoon (road kill) on his head, not a squirrel! DeMaio has enough Hillcrest style and gay pizzazz to insist that if Jan plans any mayoral campaign appearances with him, Goldsmith must only wear his high-quality possum pelt on that shiny dome! 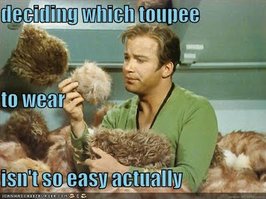 LOL.....Goldy should shave his head and go Telly Savalas, or get a DECENT toupee (one that is not so OBVIOUS)!