Former cop back in court, the good and the bad

A disgraced cop got words of approval yesterday afternoon, from the same judge who took his guilty plea five months ago.

Judge Kimberlee Lagotta read from a doctor’s report affirming that former-cop Michael Christian Koch has been attending group therapy sessions every week, and that every drug test has come back negative, including the last test October 1, 2012.

“I am staying sober and I have hope for the future,” Michael Christian Koch said after the hearing. He was also overheard saying that he now has financial difficulties, because of his felony conviction.

Michael Christian Koch, 44, admitted second-degree burglary last May. He was accused of taking evidence from Carlsbad Police headquarters in January 2012, a police spokesperson at the time said Koch took drugs in front of “numerous police employees” who were witnesses.

The 18-year-veteran, a vice and narcotics detective, was arrested the same day of the offense, January 19 2012.

Koch got a suspended sentence and 3 years probation and was ordered into a drug program. Privately retained defense attorney Ray Gomez was able to keep Koch out of custody, the defendant has been at liberty, on his own recognizance, since the day he was arrested and released.

Prosecutor Paul Azevedo said, “The defendant appears to be in compliance. This is an opportunity for the system to work for the betterment of the individual and society as a whole. It is a serious matter. His success is because of his own efforts and that of his attorney.”

The former cop has two more court dates, both calendared in year 2013, when more progress reports will be reviewed by a San Diego Superior Court judge. 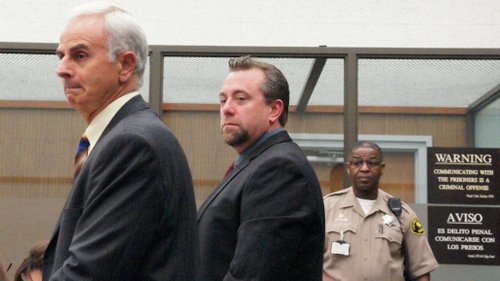 Koch got a suspended sentence and 3 years probation and was ordered into a drug program.

This was a GIFT...and it would NEVER happen to the average poor person or a minority.

Privately retained defense attorney Ray Gomez was able to keep Koch out of custody, the defendant has been at liberty, on his own recognizance, since the day he was arrested and released

As usual the Rex the wonder dog/surfpuppy619 provides inaccurate information. California voters passes Prop 36 nearly 12 years ago. The law is a drug diversion program specifically design to keep people out of jail/prison and get the into supervised treatment programs. Surfdog...one of your more educated peers published some very helpful information about the program on their website: http://www.shouselaw.com/proposition-36.html

A very simple search found the information in a matter of moments. So there was no gift here, just the District Attorney's office following the law as set forth by the will of the electorate.

Koch is probably collecting a pension despite his conviction. He probably put in his retirement papers the day after he was arrested.