So the Reader is 40 today, and to celebrate, they've put their first issue online. As the promo notes, "Among the early writers for the paper were Kathleen Woodward (ex-wife of Washington Post reporter Bob Woodward); Jonathan Saville, literature professor at UCSD; Eleanor Widmer, who taught at UCSD and San Diego State; Jeff Weinstein, who went on to review restaurants at the Village Voice; Connie Bruck, who later wrote for the New Yorker; and Duncan Shepherd, a graduate student in visual arts at UCSD." A pretty fine stable! But it's the other bylines that really shine: a cover story by Paradise Lost author John Milton! And a story on dance classes by Rodney Wanker! Rodney Wanker! This guy, or fantastic phallic pen name?

Gems from the classifieds page:

Rides! You could advertise for a ride! 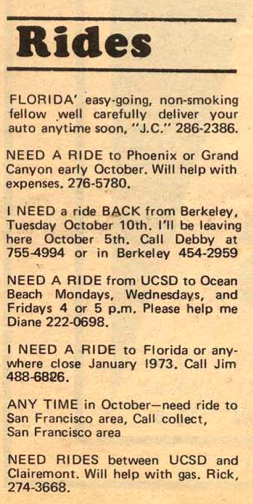 You could hire a painter to work for canned food!

You could indulge your Nazi obsession in semi-privacy!

People were trying to get marijuana legalized, just like today!

And finally, a brief glimpse of horrible sadness: