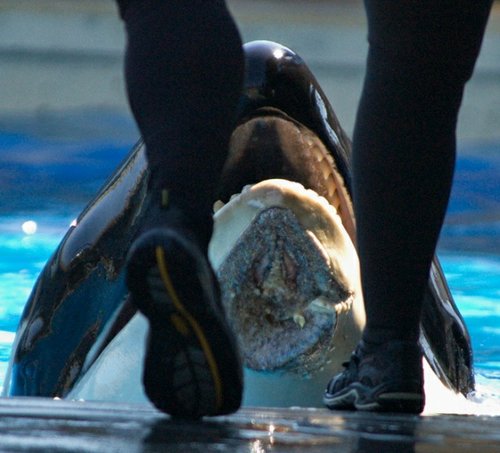 Recent photo of Nakai, from Ingrid Visser of Orca Research Trust. Puncture wounds below the main injury may indicate teeth marks from another whale.

People for the Ethical Treatment of Animals is calling on the U.S. Department of Agriculture to conduct an investigation regarding the injury suffered by SeaWorld San Diego’s 11 year-old orca Nakai last month, when a portion of the whale’s mandible was sliced off, leaving a gaping wound exposing the jawbone.

The piece of flesh Nakai lost was reportedly large enough that SeaWorld employees were able to retrieve it from the bottom of the performance tank, though it appears to have taken them several hours to first notice the injury.

“The [Animal Welfare Act] makes it clear that "marine mammals that are not compatible must not be housed in the same enclosure." Yet SeaWorld parks have a long history of housing incompatible orcas from widely divergent groups together in enclosures—and the result has been stress, agitation, aggressive and bloody raking, serious injury, and death,” says a portion of a statement from PETA’s Jeff Mackey. 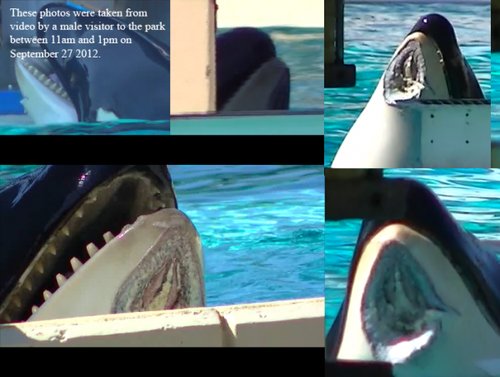 Outside magazine correspondent Tim Zimmerman, who first broke the news of Nakai’s wound, notes that the injury was suffered at an evening show after the park was already closed to regular visitors; it is common for SeaWorld to host an extra private show for corporate visitors such as this.

“During the show Nakai, Keet and Ike were all at stage when all three killer whales suddenly took off without warning and started fighting with one another,” as Zimmerman describes the incident. Nakai then bolted from the performance tank toward his nighttime holding pen, while Keet and Ike were brought under control and the performance was able to resume. Review of performance tapes failed to identify who was the aggressor during the fight, but the incident calls into question whether Nakai was bitten by another whale or if he suffered his injury bumping into part of his tank, as SeaWorld states.

In addition to previously voiced concerns over infection, veterinarian/activist “Christina” from codeorca questions whether the damage is of a nature that will allow for proper healing.

“The location of the injury does give me some concern that the masseter, the muscle which controls the mandible, may have been damaged. If so, this could severely hinder his ability to open and close his jaw properly. . . I have seen animals with severe degloving injuries and muscle damage down to the bone, much like Nakai’s injury, where the skin never fully heals over and part of the bone is permanently exposed. In many of these cases, skin grafts were attempted but did not succeed. In such cases, the continued risk of infection is so great that amputation of the affected limb is often the only solution. In the case of Nakai’s jaw, however, full amputation is not really an option,” writes Christina.

At present SeaWorld San Diego does not have any statement concerning the PETA action or findings on Nakai’s injury beyond an initial response that he was receiving antibiotics and that staff was “pleased with the healing progress” he was making.