A 15-year-old Vista boy has been charged with murder, as an adult, in San Diego’s North County Superior Court.

A prosecutor said the boy was one in a group of ten to 15 persons who had a fatal confrontation after 10 p.m. on a Saturday night, November 10, 2012. It was in Brengle Terrace Park in Vista where members of a Vista gang and members of an Oceanside gang gathered, according to prosecutor Robert Bruce.

The small pocket knife allegedly used in both stabbings was “linked to” the 15-year-old boy, according to prosecutor Robert Bruce. The prosecutor said the teen already has a juvenile record, but declined to give details.

The young defendant is charged with one count of murder and one count of assault with a deadly weapon, and there are gang allegations attached to each count. The boy pleaded not guilty at his arraignment November 20, 2012, through his public defender.

A Superior Court Judge ordered that the boy’s face not be shown. The defendant is held in lieu of $2 million bail, and is next due in court December 17. 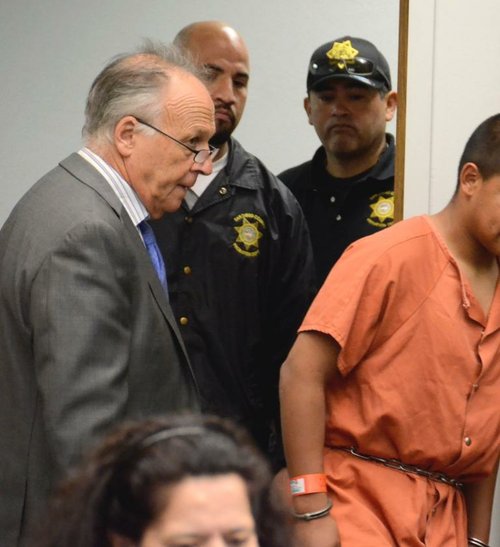 If he's the typical local 'banger, there's no chance he can make $2 million bail. So he stays in the slammer until his trial and sentencing. Make you feel better? Nah, he'll be back on the streets within five years and back to his old habits. Charged as an adult? Makes little difference now, with the prisons overcrowded and letting them out early.

Murders do NOT get out early Vis, they serve their entire sentecne, no credits of any kind, whatever the sentence may be. If he is in juvy court they can keep him until age 25 (??), 10 years.

Unless they a=can establish the 15 y/o used the knife I have a hard time believing a 15 y/o kid had the physical ability to kill a 24 y/o, with a small pocket knife.

Yesterday, March 13 2014, a date was confirmed for trial. The teenaged defendant turned 17 this year, and is on calendar to begin a murder trial on May 7, 2014, in San Diego's North County Superior Courthouse.