Three defendants in a notorious murder case were in court today, one defendant got a new attorney and the date for a preliminary hearing for all three was reset for the end of January.

Dorothy Maraglino is reportedly considering acting as her own attorney, but she did accept a court-appointed defense attorney today. Megan Marcotte, a county defender, replaces Sean Leslie as counsel for Maraglino, 37.

Louis Perez, 46, only spoke briefly, to consent when the judge asked his permission to move the date for the preliminary hearing from December 3 to January 24, 2013.

The attorney for defendant Jessica Lopez, 25, is protesting the seizure of what she termed "attorney-client-privileged" paperwork from the jail cell of her client. Defense attorney Sloan Ostbye was sent to another courtroom for another judge to hear that matter, this afternoon in San Diego's North County Superior Courthouse.

All three defendants plead not guilty and deny all allegations, in the murder of a young woman who was married to a deployed Marine at the time she went missing. Prosecutor Pat Espinoza is charging special circumstances, including conspiracy and kidnap and torture in the brutal death of Brittany Killgore. The abused body of the 22-year-old woman was found three days after she was reported missing, in April of this year. The prosecutor said Brittany Killgore was last seen alive getting into a car with Louis Perez. 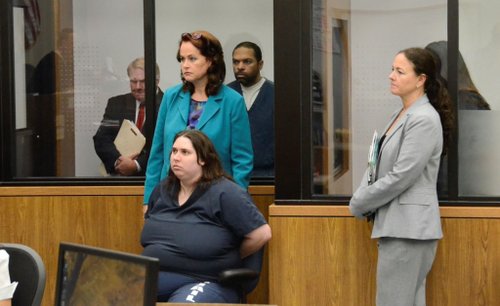 They are all hideous losers

Didn't that Lopez chick play the Peter Pettigrew character in the Harry Potter series? They all need to be convicted quickly and without compassion.