San Diego developer Doug Manchester, who bought the San Diego Union-Tribune amid speculation that he was primarily attracted by the venerable but struggling newspaper's Mission Valley real estate, is apparently living up to expectations.

According to a "Posted Notification of Application" that has popped up on the front lawn of the newspaper's headquarters at 350 Camino de la Reina, the U-T wants to build "198 residential condominium units" along with 234,415 square feet of office space and a 6,470 square foot retail facility on the 12.86 acre site. 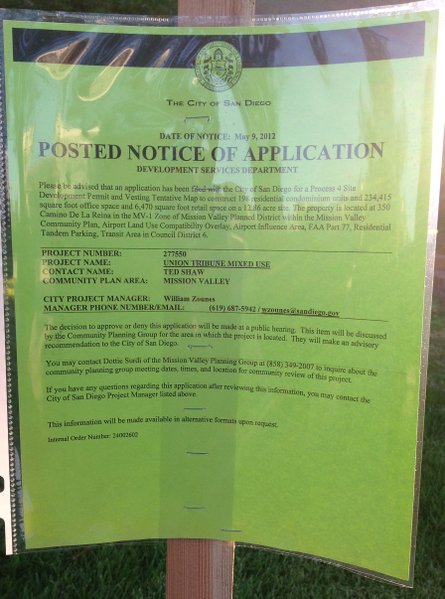 Notice posted on the front lawn of the Union-Tribune

Called the "Union Tribune Mixed Use" project, the proposal "will be discussed by the Community Planning Group for the area in which the project is located," says the notice, dated May 9 and posted by the city's Developmental Services Department.

Interested parties "may contact Dottie Surdi of the Mission Valley Planning Group at (858) 349-2007 to inquire about community planning group meeting dates, times, and locations for community review of this project."

Ever since Don Bauder first reported Manchester's purchase of the Union-Tribune from Beverly Hills-based Tom Gores and his Platinium Equity group last September, speculation has been mounting about the La Jolla real estate and hotel mogul's ultimate intentions for the company's assets.

Manchester is no stranger to city development regulators.

As we reported earlier this week, Paul Robinson, the U-T owner's contract lobbyist for development and real estate issues, has been spending plenty of time at city hall of late dealing with alleged land use permit violations and related environmental problems at Manchester's posh Grand del Mar hotel and golf course in North City.

UPDATE: After the sign appeared, apparently prematurely, on its front lawn, the newspaper broke the story itself on its website this evening, saying the project would cost $200 million.

We have also learned that plans to build a Times Square-style news ticker on the property have already drawn internal resistance from city officials who have seen details of the proposal. In addition, officials have questioned the legality of current banner signage on the top of the existing U-T headquarters.

The paper quoted Manchester as saying:

"Our vision is to build on that brick-facade tradition with higher density, including upscale residential apartments/condos and a state-of-the-art Class A office building."

The paper added, "Market conditions will determine whether the residences are first rented or sold."

"I think it will set a new tone," Manchester was quoted as saying, "in the fact that people will not only be able to work there but be able to reside, shop and dine there -- all within walking distance from the various facilities, including rapid transit, because of the trolley being a few hundred yards away."

"You'll have a great view," he told his own paper. "That river walk is going to be nice."

LOL...yes, here is a huge need for condo development in So Cal, and nationwide.

DOA, there is NO WAY any lender would lend money to build spec condos and office space, not for another 5-10 years. Unless Manchester is going to front the $200 million out of his own pocket-which will never happen- this is DOA.

It doesn't come across as the sort of massive redevelopment of that entire property that many had thought he would eventually propose. For the time being this makes about as much sense as anything else about that acquisition of the UT. As in not a whole lot. The more we think we understand, the more we must realize we do not understand at all. None of this really seems to make sense. Does Dougie have a master plan? Future decades will tell.

Once Papa starts designing the project and applying for approvals, he can go to a lender and obtain a line of credit and borrow against the future value of the project. He could probably borrow $30 to $40 million upfront and use the money to keep himself afloat for another 2 or 3 years, if he needs to. By that time, he could probably convince a lender that the Grand Del Mar is worth more than his investment, and borrow $50 million more against the value of the Grand if he runs short. He could also borrow against the U-T if he can convince a lender the paper is worth more that he paid for it. He could also sell off participation in his contract to develop the Navy property if he needs cash. Papa is not going to run out of cash any time soon. You can be certain he's flush.

I doubt any lender would lend money for a project like this based on future value. I would say is is very unlikely if at all. If he wanted to collateralize his other properties to cover the building costs, then MAYBE, but he would be putting his entire net worth up for grabs if the plan did not go as expected, and it wouldn't, no way do rich people put their own money into these speculative projects.