Members of planning groups from across the county converged on county chambers on Wednesday in opposition to a proposal that would limit the role of community planners in San Diego County. Supervisors have discussed the issue before, both times receiving criticism from dozens of community planners.

Today's hearing was no different. Residents often accused the Supervisors of being in the back pocket of developers and attempting to muzzle the community. Some comments from residents drew a response from board members.

"Community planning groups are faced with an unnecessary limitations, or, quite possibly, total extinction. It was very disappointing, in my opinion, that two supervisors on this board are much in favor of this. Remember you are all elected to serve the communities you represent and by limiting them is certainly not in the best interest of good county government," said Bob Smith, a planner from Pine Valley.

Supervisor Ron Roberts responded: "How do you know what Supervisors are thinking? You are out there stating this as a fact." 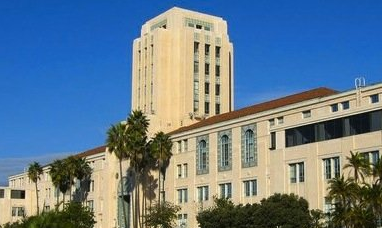