Residents of Santee and San Diego now have some time to learn about the Quail Brush Power Plant, a proposed 100 megawatt, natural gas-fired power plant slated for construction just south of the landfill.

Today, planning commissioners in San Diego granted a thirty-day continuance on a decision to change the zoning of 22-acre site from open-space to industrial.

Councilmember Marti Emerald appeared before the commission to ask for additional time so that residents and local planning groups can review the proposal from North Carolina-based energy company Cogentrix Energy. Emerald had initially asked for 60-days of additional public review but agreed to thirty days after Robin Madaffer, representing Cogentrix, requested a compromise.

The Quail Brush Generation Project has become a flashpoint issue for nearby residents. Residents say the eleven reciprocating engines, intended to provide power to SDG&E's grid during peak hours, will generate noise and pollution, and decrease the value of nearby homes. In addition, residents say they have been ignored throughout the planning process.

"All of us feel as if we have been left in the dark during this process," said one Santee resident during public comment.

Residents will have an opportunity to discuss the project at a public workshop sponsored by The California Energy Commission on March 22. The issue will also be discussed at the April 16 meeting of the Navajo Community Planning Group. Reciprocating engines? Somebody must be kidding! Generating plants almost uniformly use turbines. If they are serious about them being reciprocating, one can only assume they are recycled diesel engines from a scrapped air craft carrier or some such.

Alas, that open parcel of ground near the landfill was too good to be wasted.

Hey Visduh, They are serious. Here's an excerpt from quailbrush.com

"...high efficiency, reciprocating engines specifically designed for low emissions, low noise, and quick-start capabilities to allow SDG&E to meet its customers’ needs when other resources, like wind or solar, are not available."

The more I look into this to get the facts the more disturbing it is. SDG&E and Cogentrix have no consideration for the park or nearby community. One is hard pressed to say they tried to smuggle this thing in but it sure looks like it. I was very disturbed to find out that the CEC does not include the loss in property values in their socio economic analysis. I hear through the grapevine that just the threat of this power plant is already dropping real estate values in Santee.The CPUC has not even determined if there is a real need for this thing yet, and they march forward anyway using taxpayer money on the CEC process. During construction it will take 5 million gallons of water for the grading process, and 500,000 cubic tons of earth will be moved. This is just a bad idea no matter how you look at it. What happened to conservation? 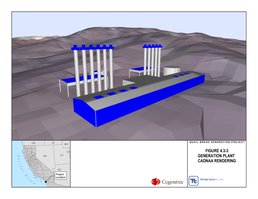