Our Lady Of Perpetual Ocean Damaged in Move

Local artist Mark Patterson has found a new home for his colorful mosaic entitled “Surfing Madonna.” The large artwork now takes up most of a wall facing a patio at Café Ipe, on Highway 101 in North San Diego County. Locals sometimes call the place "Coffee Coffee," acknowledged by a banner on the wall.

The soft-spoken artist tried to make an anonymous gift of his art by secretly putting it up, overnight, on public property a year ago. But the art was considered controversial because of its central figure, and though it was well-received by locals and passersby, politicians ordered the glass mural removed.

The heavy mosaic suffered some damage in the move, and there is blue tape covering not-yet-repaired places.

During its second day at the new location, Tuesday June 26, passersby warmly thanked the artist for his work and posed with him for pictures, in front of the mural.

Artist Mark Patterson noted that there is room for adding his signature to the artwork and said he is considering doing so. When asked if he has chosen his next subject for his next work of art, the artist joked, “Boogie Boarding Buddha.” 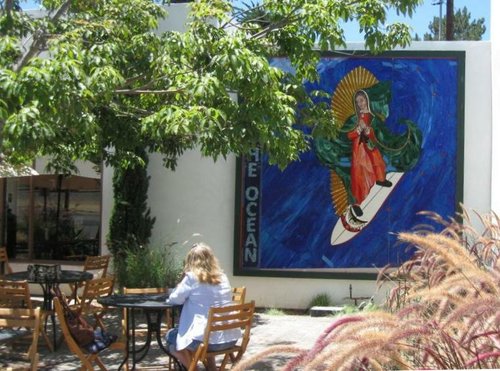 Passersby took turns thanking the artist and posing with him for photographs, at the eatery located at the corner of Jasper Street and Highway 101. Photo by Bob Weatherston. Posted by Eva Knott.

I am SO glad to hear this!

I'm glad he found a home but hope he retained rights to it- little restaurants /lounges haven't been that successful long term in that stretch - with a few exceptions- and I'd hate to see the restaurant owner cart it off without asking...I'm not a cynic, just concerned about long term viability-

geesus that would be awful TS....hope that that doesn't occur with our lady here