UT Bringing in VP of Sports

The UT is bringing in a vice president of sports who allegedly will run the sports department with authority for both the online and print product. According to knowledgeable sources, current sports editor Jay Posner, the current boss, will now have someone over him. Before he was sports editor, Posner had a sports media column that sometimes took pokes at stations run by John Lynch, current chief executive of the UT.

According to the good sources, the new sports VP will be Larry Graham, who now is an editor of National Football League coverage for ESPN. According to his résumé, Graham has had many jobs in sports journalism in a short period of time. He has covered sports for the Fayetteville, NC Observer; was assistant sports editor at ThisWeek Community Newspapers in Columbus, Ohio; was a prep sports copy editor at the Milwaukee Journal Sentinel; was sports editor of the Lima News (Ohio), and assistant sports editor at the Oshkosh Northwestern (Wisconsin), among other assignments prior to joining ESPN.

Following the highly controversial firing of sports columnist Tim Sullivan, Lynch has allegedly been holding so-called "fireside chats" with newsroom departments, warning employees not to talk to "our enemies," including the Reader, Voice of San Diego, and the 919 Report, a newsletter that goes to more than 500 former and current news employees of the U-T (now called UT). However, my sources say that Lynch's chat with the sports department, which was supposed to come first, has not yet taken place.

get out that asbestos underwear Don...we need u to stay safe up there in Colorado!!! 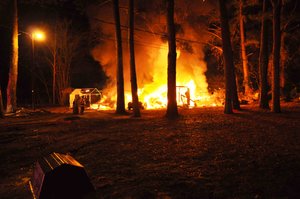 We're two hours south of the Colorado Springs fire, Nan, but thanks for the concern. Best, Don Bauder

Well, the newspaper is showing an awareness of its true appeal, or at least what "everyone" knows is what keeps men buying and reading papers. So they get rid of Sullivan and within a matter of days are getting a new sports VP. Well see if this shift gets the falling circulation to level off.

I am not sure this move will arrest the decline of the print and online audiences. Tim Sullivan is a sportswriter with class and eloquence -- the opposite of the new UT TV characters, Billy Ray, Kaplan, and their female accomplice whose name escapes me. Acee isn't one-third as good as Sullivan. Sports investigative reporter Brent Schrotenboer is also extremely good, and he just left, along with some other reporters such as Wendy Fry. The really talented are either being fired or are leaving, seeing the handwriting on the wall. Best, Don Bauder

Spending a reported $3 million on the TV studio does not appear to be a smart move. The TV studio will probably be shuttered in six months after Manchester and Lynch realize that there's no audience for its product.

There is a market for inane talk, as radio proves, but whether a newspaper should do such broadcasting is another question. Best, Don Bauder

Maybe Lynch should hire Van Gorden Sauter to run the newspaper. Van has a solid background in print journalism and was President of CBS News. Van helped Larry Tisch trim a lot of fat from the CBS payroll and he could do the same for Lynch. Under Van's leadership CBS went from being the Tiffany network to the 99 Cent Store network.

You have fingered a very important question. What kind of market is UT seeking? Hate radio (Limbaugh, Hedgecock, etc.) and Fox TV prove that rednecks can constitute a remunerative audience. But in San Diego, others already own the redneck market. Ditto for sports chatter: it reaches an audience that gobbles up fatuity, but can or should a newspaper battle for market shares in that space? Most of Lynch's career has been in the sports chatter industry; is that all he knows? Keep in mind that the Copley management flopped with radio. I doubt if there is a market for serious news in San Diego radio. (Four decades ago, the major stations all covered news; that has been gone for a couple of decades now.) Ink-and-paper journalism is on its way out -- little argument there. But should the UT stick to presenting serious news and interpretation on the Internet and abandon jejune radio/TV? That's a question Manchester must face. Best, Don Bauder

"our enemies"..."fireside chats". Does this guy think he's landed in the White House? Sounds as if he's trying to emulate Nixon, paranoiacally. (mea culpa) Makes me wonder how many deep, dark secrets are yet to be revealed about IL Papa and his Lynchman. And yes, the UT should abandon jejune radio/TV. We're already into jejuly!

I am sitting here sipping a mint jejulep and pondering how to respond to your perspicacious observations. Yes, the personalities you cite have definite similarities. Deep, dark secrets? Stay tuned. Some may surface. Best, Don Bauder

"I am sitting here sipping a mint jejulep...."

Don't give me credit. Your jejuly trumped my jejune. Best, Don Bauder

Why graciously retire from the competition when you are on a roll? Best, Don Bauder

I tend to vamoose at the slightest mention (imagined or otherwise) of The Donald.... "your jejuly Trumped my jejune".

I agree with you 100% on Donald Trump. I should not have used the verb "trumped." Best, Don Bauder

When Lynch became second in command I told you that Posner was on limited time because of his negative columns about the sports talk radio stations. You never know who will be your boss someday. Remember, they made Kevin Acee a columnist and after he was in place they got rid of Tim Sullivan. Sounds like Posner is next. Where did Brent Schrotenboer go? I agree that he is a good writer. Much of his reporting dealt with legal issues and a lot of dirt was made public about athletes. Do you think that someone complained to Lynch? Schrotenboer covered Bob Knight at Texas Tech and was able to get along with Knight. If he couldn't get along with Lynch, what does that say about Lynch?

Schrotenboer was not forced out, according to my sources. He is going with USAToday for higher pay than he was making at the UT, and will remain in San Diego. You are correct: you had warned earlier that Posner would be in trouble because of what he had written in his sports media column before becoming sports editor. Best, Don Bauder

You should refrain from using filthy language on this blog.

Just because it is French doesn't mean it is dirty, despite the French people's celebrated proclivities. See translation above. Best, Don Bauder

Perhaps you could enlighten us as to what the French people's celebrated proclivities are? I guess I should take the time to point out that my wife is French, so I'm wondering if there's something I've been missing out on all these years. LOL

Maybe I was unduly influenced by Strauss-Kahn. Or those heads of state with their mistresses. Or maybe I have been prejudiced by that old metaphor, "As busy as a French whore house on Bastille Day." It just seems to me that just as the Irish are known for their fondness for distilled spirits, the French are known for...oh, never mind. Best, Don Bauder

Why did God invent whiskey? So the Irish wouldn't rule the world. So far, so good. Aren't the French known for Freedom Fries? 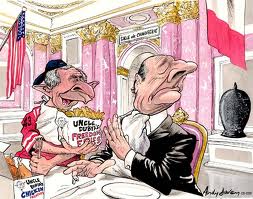 When I was a youth in a Chicago suburb, the Irish certainly ruled the city of Chicago (not the suburbs). Probably still do. Another truism: God created the Mississippi River to keep the Norwegians in Wisconsin and Swedes in Minnesota from killing each other off. Best, Don Bauder

I predict that the U-T will cease to print within two years. Lynch ran 1090 into the ground and he'll do the same thing with the U-T. Posner can be annoying but he's a smart newspaper man. One by one, those people will be gone. The toy department is the least of their worries there, so it's interesting how Lynch is supposedly focusing on that. Nothing they go after is relevant anymore, it's a damned joke.

Bill Center is near retirement, thankfully, and Nick Canepa has always been unreadable and he's getting old as well. Kevin Acee has been promoted from beat writer to columnist, proving that the Peter Principal is alive and well, because Acee can't write his way out of a parking ticket. This latest purchase of the U-T is a great example of how to completely wreck a newspaper. And not that their sports section was ever anything to write home about, but firing Sullivan was entirely idiotic, he was the only person who could write sports with dignity and clarity for that paper.

Man, I'm telling you, take a look at how the old L.A. Herald Examiner ran their sports page and make that your blueprint. Greatest sports page ever from a daily, all of those writers went on to accomplish some great things in sports journalism.

Some knowledgeable people in the newspaper industry are predicting that print editions will be gone in ten years. I have said that print editions could last one or two generations, but I could be wildly optimistic on that. And I certainly don't think that if they last that long, they will be money makers. I do believe that print editions of rural weeklies and dailies will last longer than a decade because they are not competing so much with the Internet. It's the metro dailies that are most vulnerable. And the UT under current management is among the most vulnerable of metro dailies. Best, Don Bauder