A Northern California man, who was convicted on rape charges despite recently disappearing, is being sought in Baja California after his mothers vehicle was recorded crossing into Mexico on Wednesday, December 12th. Spencer Scarber, the 20 year old convicted rapist from Squaw Valley, California, was convicted last Friday of raping and robbing a 35 year old Squaw Valley woman. Scarber is facing a 112 year sentence and is awaiting another trial regarding raping a minor while he was free on bail from the initial case.

According to the Fresno Bee, Spencer’s dad is an assistant chief in the California Highway Patrol’s Central Division. The father, Kyle Scarber, said he last saw his son around 1:30am on the day he disappeared. Kyle states that he checked on his son around 5:30am to find him missing. He claims blood and Spencer’s crutches were found in the driveway of the home.

According to state prosecutor Leanne Le Mon, federal border crossing records show Spencer’s mother, Gail Scarber, crossing into Mexico at San Ysidro around 3:24am. The records also show that Gail and Spencer’s sister crossed back into the U.S. on foot at 4:44am.

Spencer Scarber is 5’9” and weighs 155 pounds. He is believed to be in the Tijuana area or to have traveled further south towards Ensenada. Anyone with information is asked to call the Fresno County Sheriff's Office at (559) 488-3111. Feel free to contact me anonymously by phone or text at (619) 306-7730. 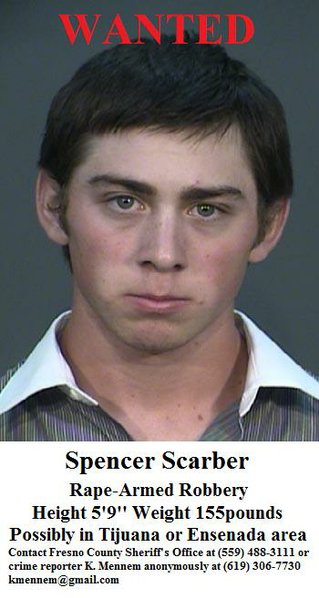 Apple didn't fall far from the tree with this one....

SurfPup, can you 'splain to me, with my limited intelligence, how a convicted rapist was still out on the streets? I've carried this warped notion that once a felony conviction is obtained, bail is revoked, on the assumption that the perp will get a long, hard prison sentence. If he was out on bail awaiting the verdict, somebody was asleep at the switch as far as monitoring him. Could that have something to do with Dad's occupation and position? But does anyone think he can go on the lam for the rest of his miserable life in Mexico? His type is about as welcome as a skunk at a picnic even south of the border.

My simple education wasn't much but I do know that unless you can reverse time, its kinda impossible to be crossing the border on minute than make your way back to the valley to only come up missing.