California’s Proposition 1A, passed with 52.7% of the vote statewide in 2008, promised a high-speed rail line running from San Diego to Sacramento would be built at a cost of about $40 billion, using state-issued bonds and federal money for the construction.

Today, cost estimates from the California High-Speed Rail Authority have more than doubled, to between $98 billion and $118 billion – even the lower estimate would make the project the most expensive railroad in history. Projected fares have also increased substantially, voters were originally told a one-way ticket between Los Angeles and San Francisco on a 200 MPH bullet train would cost about $55 for the 2 ½ hour trip. The Rail Authority now plans to peg the price of a trip to about 83% of that of a comparable airline ticket, resulting in a fare of about $105.

Because of the massive cost overrun, Assemblywoman Shannon Grove of Bakersfield and state Senator Doug LaMalfa of Richvale have said they will co-author a bill giving California voters a chance to rethink the project, given the massive cost overrun and the potential that the federal dollars originally in the mix may not be available given budgetary concerns on a national level.

If the railway is built, construction is set to begin late next year on the first 65 mile stretch of track, running from the town of Cocoran north to Borden in the Central Valley, passing through Fresno. The route has been dubbed “the line to nowhere” by critics. The main line, running from Los Angeles to San Francisco, is projected to be completed by 2020, with a northern extension to Sacramento and a southern one to San Diego in place by 2026. Some experts have said it could be 2030 before the full project is online.

This blavk hole for money needs to be canned, the sooner the better.

The cost benefits ratio is so off it is ridiculous.

A prototype of the new state-of-the-art rail cars is shown here. Looks good to me, although I will NOT wear one of those drab suits. [photo courtesy Los Angeles Times] 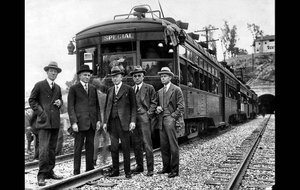 I'm with SurfPuppy. What a boondoggle. I can't wait to put this lame dog down at the voter's booth.

Just another cover for the Giant SUCKING Sound . . .

New Jersey's governor stepped up and killed a train/subway project into New York not so long ago. It's too bad our govenor doesn't have the balls to do the same to this.

This article is in error. The line from SF to LA is now projected to be complete in 2033, not 2020, at a cost of between 98 and 118 Billion dollars. The Rail Authority's just released new business plan makes no projections about when lines will be completed to Sacramento and San Diego. Nor does it speculate on the cost of these additional lines.

This sort of high-speed rail transport is the mode of the future for densely populated areas (such as California). The route, as planned, would represent a vastly superior way of traveling from, say, Los Angeles to San Francisco. No trip to the airport, no airport security (Hooray!), no arriving far ahead of departure. So, it is a worthy project.

But everything government does is "worthy", and if we tried to do all the things proposed, government would sop up every bit of economic output, leaving nothing for us to live on. If, and this is a huge "if", we had our finances in good order, projects like this could be considered. Today neither the state nor federal government is capable of pulling this off without expensive, risky borrowing. When people say that having a financial mess hurts, they have it right. There are many things we "should" have that are now unaffordable.

That $55 fare quoted is just about the fare today on Amtrak's San Joaquin train. From San Diego to Sacramento, it involves a train to bus to train route, and takes just about all day. The speed and convenience that it could provide would be worth $100 or more, and the fare would not stand in the way of ridership. There are now competing airline fares that beat that number, but don't count on getting one on short notice just because you want to go.

Let's revisit the idea in five years, and at five year intervals thereafter. The idea will not go away, neither will it suffer from waiting.