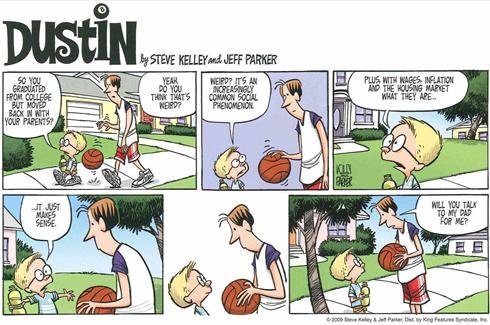 The 4th Appellate District has reinstated the lawsuit that former Union-Tribune editorial cartoonist Steve Kelley filed against the U-T.

The suit was thrown out by Superior Court Judge Jay Bloom in November of 2009. Kelley had been fired by the U-T. He and Steve Breen, who replaced him, planned to do a cartoon called Dustin. But Breen backed out. Kelley charged that the U-T interfered with the contract he had with Breen.

There were some very interesting -- to say the least -- developments in the case. For example, Breen testified that he had met with his editor, Bill Osborne; Breen remembered specific details of that conversation. Slightly more than a month later, the U-T's law firm stated that Breen no longer remembered the conversation. Similarly, Breen testified under oath about a meeting with Karin Winner, then editor. However, Breen later said that he had no memory of that meeting.

A vice president of the syndicate that was to market Dustin said that Breen told him that his job was "definitely threatened" if he went ahead with the strip. Breen told the syndicate VP that he would lose his job if he did the strip with Kelley. But such events seemingly did not sway the judge. Hmm.

Kelley joined with another cartoonist in putting out the Dustin. It now runs in more than 300 papers and won the 2011 Reuben Award for best newspaper cartoon. However, Kelley's attorney, Bob Gaglione, says it would be doing much better if it could have been launched when Kelley and Breen first planned it years ago.

This seems to have been decided on June 1, here it is;

Yes, I have the appellate decision. Maybe I should have noted the date. But I just found out about it. Best, Don Bauder

This case still reeks of perjured testimony. Since it is a suit in state court, is there any chance that the attorney general will be looking at that angle? Or Bahnee? LOL

it is a suit in state court, is there any chance that the attorney general will be looking at that angle? Or Bahnee?

You mean Dumanis would look at possible perjured testimony by someone in the media? You have to be kidding. Best, Don Bauder

Less than zero chance with Dumanis. AG will look the other way, too. Best, Don Bauder

This kind of intellectual brittleness has as its root, the replacement of social mores with "Codes."

I wonder if anyone's ever done a real study of the ratio of bad decisions under six-gun justice and "law?"

Ok, so what seems to be the most likely conclusion?

It appears that, whether we like it or not, media-enfrenzied lynch-mobs are about to take over. Ms. N.G. for Chief Justice of SCOTUS? V.P. for VP?

Anybody would be better than the current chief justice of SCOTUS. He is completely in the pocket of Wall Street and big business and so are the other Bush I and Bush II appointees on his bench. Best, Don Bauder