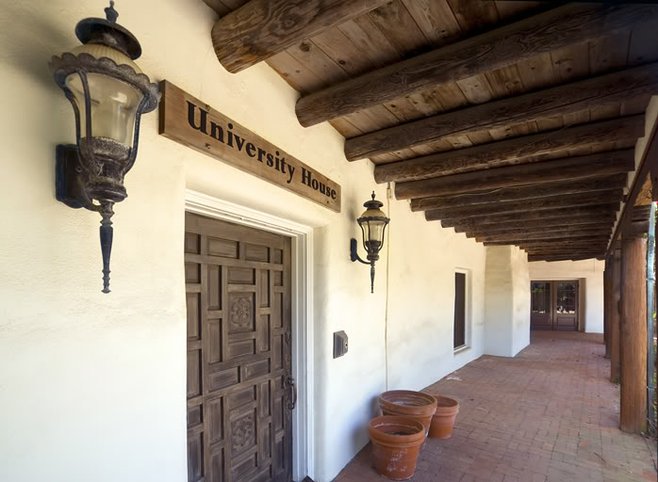 With UCSD Chancellor Marye Anne Fox on her way out the door, University of California regents are grappling with costly plans to restore the old chancellor's house, providing her successor with the kind of multi-million dollar, well-appointed mansion that Fox, despite vigorous lobbying over the years, never got to enjoy.

Earlier this week, a university contact tells us, the regents' Committee on Grounds and Buildings approved a Phase 1 site remediation budget of $1.5 million (apparently reduced at the last minute from $2,897,000), to be paid for by donated funds.

But that's only the beginning of the costs to come.

Tom Larson wrote about that controversy for us in back in April 2008:

"Four years ago, due to structural problems, the residence was declared unlivable. Since then, the university has sought to demolish the home and replace it with a larger one.

"But this plan has brought the ire of historic-home preservationists who oppose tearing it down. It has also brought opposition from Native Americans, whose ancestors once lived on and buried their dead on the site. In fact, University House is perched on a Native American cemetery."

How UCSD Spent Over $500,000 on a Home Remodel That Never Happened

UCSD, which had bragged it would lavish more than $7 million on the project from its wealthy donor base, finally agreed to back off its demolition plan that spring, promising to come up with a new and improved scheme, but the wheels ground slowly.

Then, in March of last year, amidst grumbling by students and union workers, regents approved an annual housing allowance of $20,000, plus moving and other expenses for Fox.

That allowed the chancellor and her husband, chemistry professor Jim Whitesell, to buy their own $1.2 million, three-bedroom canyon-edge house on Sagebrush Road in the Mount Soledad area.

But the university still wants to restore the old chancellor's mansion to its prior glory. Immediate work on the house is required because, according to the regents' action item, "bluff erosion is in an emergency state, and it is imperative that the work be completed before more erosion can occur.

"Stabilizing the adjacent bluff face will reduce the potential for loss of life and prevent further erosion and damage to University property…Timing is driven by the need to do construction work before winter rains and gnatcatcher breeding season."

But that's just the beginning of the costly project:

"UC San Diego proposes to rehabilitate the existing University House in the future, in order to revitalize and functionalize an important and historic University asset, and retain the tribal cultural value of the site."

Total cost, per latest estimate: $10.5 million, "to be funded from gifts and University (Searles) funds. Searles Fund is an endowment established in 1919 from a gift by Edward F. Searles to be used to fund general purposes of the University which cannot be covered by State funds."

That's a lot more than was talked about when Larson wrote his 2008 piece:

"Three options were suggested: the house could be renovated, demolished and replaced, or sold. Each option had its price: renovate, $5.8 million; demo and replace, $7.2 million; and rebuild elsewhere, $7.7 million (although selling the house might bring as much as $16 million)

As for the Native American burial grounds:

"The campus is committed to preserving the archaeological and cultural value of the site during any work undertaken on the site."

We have this week's action item here:

A university contact said the proposal cleared the regents' Grounds and Buildings committee earlier this week and is set for a final vote before the entire board this afternoon.

It is a beautiful property, and remodeling the existing place will work FINE.

It's probably an inopportune time to be spending big-bucks to remodel any UC President's house, but that is a beautiful place in a beautiful setting and I hope they can remodel it without disinterring any deceased Native Americans or altering the building's original character.

Why do people talk about ten MILLION dollars like it's not real money? Some of the money once belonged to you and me, in one form or another. There is never a project of any sort that doesn't claim there are no taxpayer dollars involved, and that is never true. But everybody is OK with spending to for a house for one person to live in ? Maybe two?

These Searles funds--if they didn't get used for this extravagance, would they find their way into educational uses? These bucks are real ones, not just something on paper or in the realm of vapor. Other UC campuses have such residences. UCLA has one, and it has generally stayed out of the spotlight. UC Santa Barbara has one. The chancellor who shepherded the growth of the campus in the 60's and into the 70's lived in it, and the "light was on" for visitors. He was in constant contact with the students and faculty and other stakeholders. (Sorry, I don't remember his name.) The successor found that home to be far beneath him, and he demanded and got an allowance to have his own digs nearby, but not on campus. Eventually, he was done in by scandal, one item of which was his misuse of funds to remodel and upgrade his own home. His successor was a bi-coastal woman who served out her six-or-so years as chancellor, commuting to the east coast at least once a month for several days. Where she resided when in Santa Barbara was immaterial--she was seldom home. My recall of the current occupant of the position is that he lives on the campus.

If such a residence were used to welcome staff, faculty, students, alumni, local residents, and the general public at large (i.e. the unwashed) to the campus, it might be worthwhile. If a palatial residence is just another undervalued perquisite for the chancellor, such as this seems to be headed for, then let's not bother. That site does NOT have to be occupied by a mansion for the campus honcho-in-chief. It could be made into an archeological site and botanical garden open to the public.