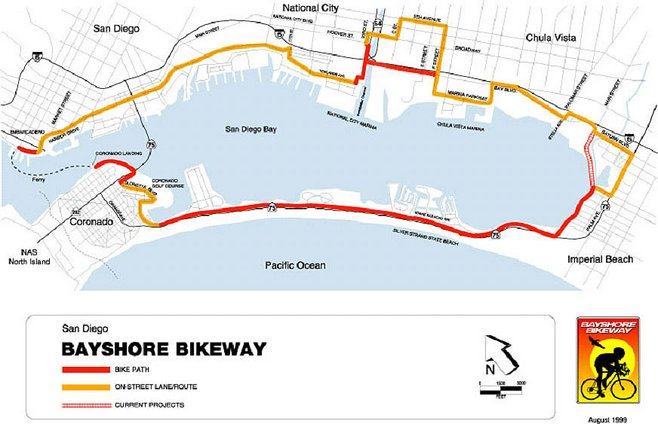 Ground broke Friday on a 1.8 mile long extension of the Bayshore Bikeway, a planned 24 mile cycling route that will almost circle the bay when completed, requiring a ferry to or from Coronado. The new span, running between H and Palomar Streets, will add to the 13 miles of path already completed. Sections remain incomplete in Chula Vista, Coronado, and National City.

A host of local government representatives including County Supervisor Greg Cox, Chula Vista Mayor Cheryl Cox, SANDAG Second Vice Chair/Imperial Beach Mayor Jim Janney, and San Diego Unified Port District Chairman Scott Peters invited the community to a groundbreaking ceremony off Bay Boulevard, where the bike path will travel along an unused railroad right-of-way. A group of about 80 spectators assembled, 30 or so having taken the suggestion to use a bicycle to travel to the event.

“At SANDAG, we believe in multiple modes of transportation,” offered Janney in support of the project.

“This is a really cheap way to build infrastructure to get around,” said Peters of the $1.5 million cost, covered by federal Transportation Enhancement funds and the TransNet regional 0.5 percent sales tax.

The Bikeway will eventually become part of the southern portion of the California Coastal Trail, a continuous bicycle thoroughfare stretching from the Oregon border to Border Field State Park in San Ysidro. San Diego is expected to be the first of 15 coastal California counties to complete work on their portion of the trail.