"We're doing something that has never been done before."

"So I made a music website!" Filip Mandaric of Capital Grey checks in to talk about his latest project which for once, does not involve his band. This time, the composer/producer is tapping in to his day job as: a web developer.

"I've made a website for music," he says, "and it's called Pitchweight. Users can rate, tag, and listen to songs from all their favorite artists. We're doing something that has never been done before, like weighting algorithms to produce reliable quality scores for every song after they've reached statistical significance, all based on open sourced public input."

I forget that Mandaric is actually a brain. I press him to translate. His main innovation, he says, lies in a new way of processing data, "and not just the input of a few select people, but the untapped wealth of information available with every single music listener."

He says he's using a "crowd-sourced, recursive rating system in which certain ratings are given more weight than others, based on how accurately those users have rated in the past."

Pitchweight uses an advanced search system to pinpoint selections based on scores, tags, and a variety of other filters. He says musicians can likewise register and upload original music to the site.

Mandaric was born in Canada but now divides his time between North County and LA. He started Capital Grey in May 2011 with guitarist Danny Chau. CG has since become a solo project.

"I actually developed a lot of Pitchweight on weekends in San Diego with input from my parents," he says. "The way I see it, this site is kind of a continuation of what's happening with Capital Grey. After I released my second EP, I realized that there are certain issues with the music industry that are negatively affecting independent artists.

"As I'm sure you've heard many times, the proverbial radio station DJ is not the person that chooses the songs to play. It's some corporate guy."

But the larger problem, he says, is that there is a veritable glut of new material. "The bands that do get heard are the ones with the money and resources to constantly pitch themselves to the right people, not the touring band who barely has enough money to eat, let alone enough to hire a PR firm."

"We're not using common primitive measures like quantity/popularity. This is full-on inferential statistics, which was a significant part of my Psychology study at Cal State San Marcos." Whether it's Lady Gaga or the garage band down the street, he claims, everyone has an equal chance of getting their music scored well and topping the charts. Pitchweight, Mandaric says, is presently at a fully functional beta build. 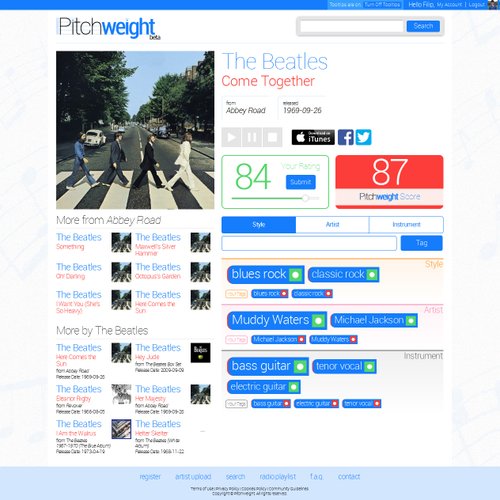