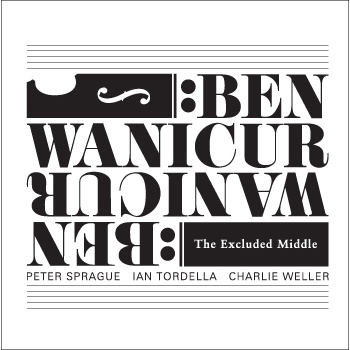 Although he hasn't been in San Diego long, bassist Ben Wanicur has been making waves on the jazz scene, and he recently released an album under his own name, The Excluded Middle with saxophonist Ian Tordella guitar hero Peter Sprague and young drum phenomenon Charlie Weller.

Wanicur has a thick, bottom-heavy sound and excellent time, but the real surprise on The Excluded Middle is his compositional facility, which is consistently excellent.

Opening with a staggered bass vamp, "13 Vans," explodes with a spooky, elliptical theme that toggles between a loping odd-meter and swing-time. Tordella really opens things up with timbre manipulation while navigating the rhythmic contours and Sprague posits inside and outside information with equal glee.

The moaning arco that sets up "Sun Chant," lands into a hypnotic ostinato that Weller tattoos with rim-shots and a hissing hi hat. Tordella and Sprague share layered solos of orbital tensions over pinpoint ride cymbal articulations that drop into whispered brushes to underpin Wanicur's dark, creative spin.

Cole Porter's "So In Love," features Wanicur's big, meaty quarter-notes , with Tordella tracing curlicues around the changes that sometimes arc into the altissimo, while Wanicur's time-centric spot drips into the bottom end.

Guest Brad Steinwehe's flugelhorn graces the leader's smoldering ballad "Hello Goodbye Hello," with a keening contribution and Tordella gets his Dexter Gordon on with a huge, breathy solo.

Closing with the off-kilter blues, "Hey Dude," a tricky head followed by adventurous and playful solos from all, including a thrilling series of fours with the explosive Weller, The Excluded Middle bristles with creative energy.

You can catch these guys at their CD release party, May 17, at Dizzy's, located at 4275 Mission Bay Dr.