"This 2-CD set was recorded over four three day sessions in Ocean Beach, in the Upper Chamber of the High Mountain Tempel Oceanic Lodge, and on Mt. Washington in L.A.," says Eric Nielsen, co-founder of existentialist tripmeisters Beggars with fellow Buzz or Howl and Maquiladora vet Bruce McKenzie, alongside non-San Diegan Glen Donaldson of the Skygreen Leopards. "It's been a few years in the making." 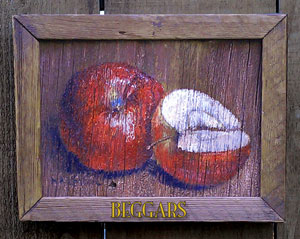 The new Beggars project is the 18th release of the duo's local label Lotushouse, which will soon also release a disc from U.K. duo Raagnagrok and a collaboration between Nielsen and McKenzie's other band Maquiladora and Japanese pop stars Tenniscoats.

It's not their first Asian-acid team-up. Beggars make drone-drenched and adventurous noise that hews closer to Japanese psych acts like Hiroshi Hasegawa (aka Astro), Acid Mothers Temple, and genre-bending industrial electrofreaks dating back to the Stones' age such as Kraftwerk, Planet Gong, Can, Tangerine Dream, and -- lest one start melting too deep into mellow -- the Residents, Art of Noise, and Devo.

“The key components of psych-noise are freedom of volume and composition,” explains Nielsen. “It’s an emotive attack on your whole body with volume, so loud that it’s not uncommon to have an out-of-body experience in a swirling cloud of intense volume.”

“Once in western Japan, I was at a show that was so loud I had to lift my shoulders to my ears. I was in terrible pain, but it was impolite to get up and leave. After about fifteen minutes, I completely forgot about the music, relaxed, and went into a deep contemplation. I awoke sometime later to be aware of the sound and sights and was amazed I had experienced this vision triggered by this improbable sound.”

Maquiladora was founded in 1995, going on to collaborate with the Japanese act Acid Mothers Temple and the band Mus, from Spain. After recording and performing for around eleven years, Maquiladora followed up a triumphant Japanese tour by taking an extended break.

Nielsen and McKenzie's other ensemble Buzz or Howl was likewise highly influenced by Japanese noise artists, even recording a collaboration album Western Mystery School with one of the scene's biggest names. “We met famed Japanese psych noise artist Astro through a mutual friend," according to McKenzie. "Plans were hatched to combine forces with him somehow.”

“She performed with Hiroshi when we played with them at the UFO Club in Tokyo in 2005,” says Nielsen. “She quietly did her thing while the loudest sounds I have ever heard emanated from the stage. The whole room shook, the support beams shook, the bathroom shook, and the sound man had to fan the board with his Japanese fan, wearing his wooden sandals.”

A song from the 2-CD Beggars album, "Will We Call It Love," can be previewed at http://www.lotushouserecords.com/1willwecallitlove.mp3