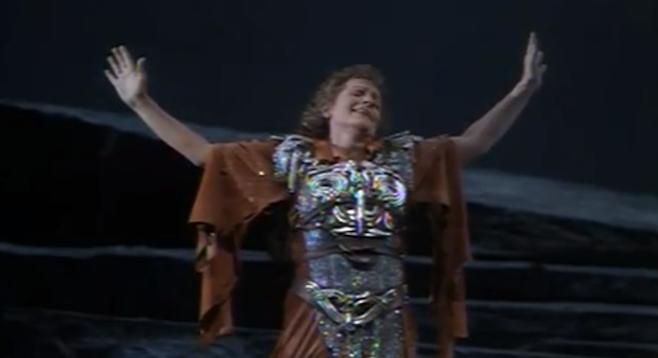 Fathers in opera aren't the greatest.

I went to see Man of Steel on Father’s Day with my dad and kids. A big part of the story was about fathers and it got me to thinking about fathers in opera.

There is Germont in La Traviata, Timur and the Son of Heaven in Turandot. However, Wotan is definitely the big daddy of the opera world.

Wotan has kids all over the place. He has children who are mortal and immortal.

He has fraternal twins who end up having a child of their own, if you know what I mean.

He also has his Valkyrie daughters all of whom have names ending in "hilde". The leader of these is, of course, Brünnhilde whom Wotan is forced to disown.

What about Pinkerton though? Benjamin Franklin Pinkerton is the bad guy in Madama Butterfly but at the end of the show he takes his son with him back to America. Butterfly is convinced that her son will have a better life in America with his father.

Perhaps the most dramatic father in opera is King Philip in Don Carlo. Philip is ready to kill his son Carlo but the ghost of Philip’s father get’s Carlo first. It’s kind of a silly ending.

All in all opera fathers are lacking several fatherly attributes.