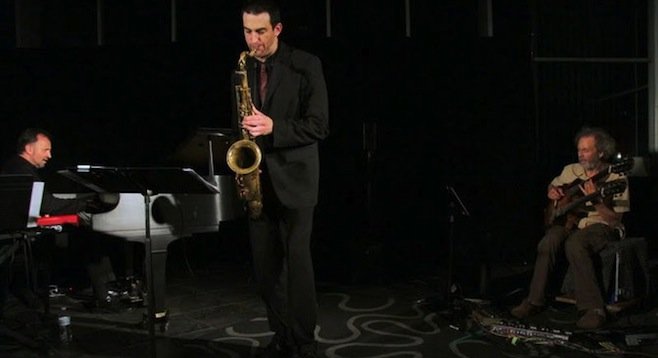 On July 28, three improvisers met on common ground for a night of open-ended discourse conducted "in the moment" for a small, appreciative crowd at Dizzy's.

Following up with an unannounced Jobim samba that found Levy purring a la Stan Getz (with a harder edge), the rhythm tandem of piano and guitar reached a zenith, and when Sprague branched out into his solo, the intricate choreography of single-note ideas embracing pliant voice-leading yielded seamlessly to Zlatkovich's effusive runs.

A tough blues with tender transitions, Sprague's "Can't Make Much Sense Out of You," featured the composer hitting first with confidence bubbling over, while Levy tended toward short jabs and counterpunches. At that point, the tune itself dissolved into a three-way discussion where the groove assumed an omnipotence.

Levy's "World As Will," was the ultimate highlight for me. Beginning with Sprague's swirling, orchestral textures and Zlatkovich's Joe Zawinul-esque chords. a dense brew was boiling by the time the composer finally entered. After a distortion laden legato guitar showcase, Levy opened things up by coursing the length of his horn with breakneck scales and honking punctuation.

Not once was the absence of a conventional rhythm section an issue.