"The Wrecking Crew" documentary: one day only

Two screenings of this film about legendary LA studio musicians happen on July 20, at the Saville Theatre at City College, courtesy KSDS Jazz 88.

Music fans of all stripes (especially those who can remember the 1960s), have an incredible opportunity coming their way: on July 20, KSDS Jazz 88 presents 2 showings of The Wrecking Crew, a new documentary film by Danny Tedesco about the famous group of LA session musicians who played on a slew of pop-music hits throughout the decade.

Even if you have never heard of "The Wrecking Crew," you certainly know their work. They played on almost every record coming out of Los Angeles, many of which were big hits, including songs from the Beach Boys, Sonny & Cher, the Fifth Dimension, Frank Sinatra, the Monkees and many more.

If you are a Jazz 88 member, tickets are just $10 each. General admission seats are $15. You can order by going to: www.jazz88.org, or you can purchase tickets at the door on the day of the screenings. There are two showtimes: 4 p.m. and again at 7:30 p.m.

I saw this several years ago and was totally captivated. Don't miss it! And while you're at it, catch its logical double-bill mate, "20 Feet From Stardom" when it opens this weekend at Landmark's La Jolla Village.

thought this was a Matt Helm movie with Dean Martin???

Nah! This is the version that I saw. 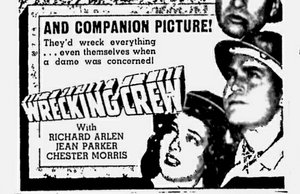