“I'm really excited about the San Diego beat scene right now and I'm also happy to be a part of it,” writes Trill promoter Andre Power via email, “but my goal is to give people more than just a night of head-nodding.”

Coined after hip-hop slang fusing “true” and “real,” Trill debuted in June and showcases the future sounds of electronic music and live beats every first Wednesday to a backdrop of live art and craft cocktails at El Dorado.

“I've recently connected with local DJ Sasha Marie after hearing a mix she put out online, which made me feel really good about the direction San Diego DJ's are moving in. The sound within the mix she released was futuristic, fun, funky, upbeat but still had an urban, "crunk","trill" sound, which is the same music I enjoy spinning."

Power says the focus of most of his events is education and providing people with a unique audio/visual experience.

"My goal with Trill is just that, a new audio experience for downtown San Diego, with international genres like, 'future bass', 'trap', 'juke/footwork' and 'future funk'. All of these sounds and more can easily be found with a bit of digital diggin, but a good place to start would be [Power’s label] soulection.com." 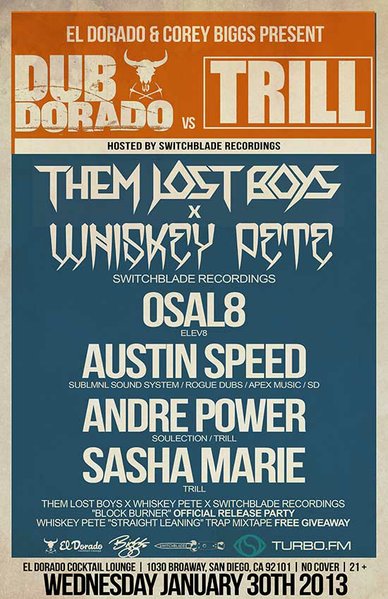