Thrashy hardcore punk outfit Retox will be kicking off a West Coast tour Monday, February 11, and will be joined for much of the trip by Tomahawk (members of Mr. Bungle, The Jesus Lizard, Helmet, and Melvins).

RETOX "The World Is Ending And It's About Time" Live video Feb. 16th, San Diego, CA

"The Ipecac team is over the moon about working with Retox," said label co-owner Greg Werckman in a press release. "We think they are a perfect fit with our eclectic roster, fitting comfortably with other original artists like the Melvins and ISIS."

Having released material on Ipecac with vocalist Justin Pearson’s sci-fi grindcore group The Locust in the past, Retox now shares the roster with Orthrealm, Mouse on Mars, several of Zach Hill’s (Hella) projects, and most of Ipecac co-owner Mike Patton’s (Faith No More, Mr. Bungle, Fantomas, Tomahawk) incarnations.

Here’s a teaser for the band’s pending YPLL tour documentary which will include appearances from musicians including Melvins and Nick Zinner (Yeah Yeah Yeahs, Head Wound City). 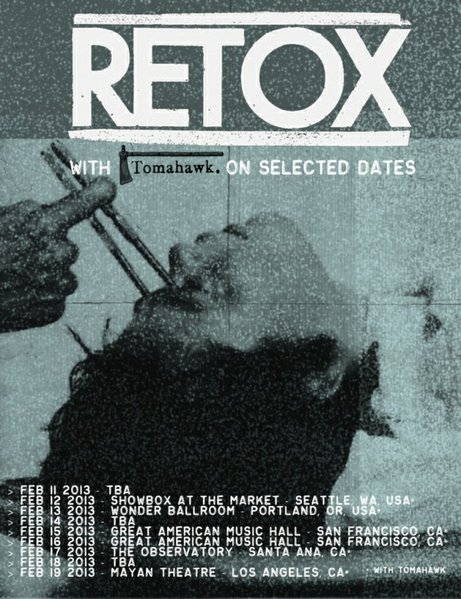