Blue Monday: the return of Lafayette Falquay and Stoney B blues

A pair of locals takes five, and then comes back, but for vastly different reasons

Note: This story originally appeared in the street edition of the SD Reader. It was edited do to the word count restrictions of print. What follows here are my original conversations with Lafayette and Stoney B, each recorded on separate occasions, and far too rich in detail to simply discard. If the legend of Robert Johnson (and subsequent sales of his reissue Complete Recordings) tells us anything, it is that America is in love with the image of the itinerant blues singer.

"You ever heard of a man cave?" Lafayette Falquay, shoeless, in black slacks, shirt, and doo-rag meets me out on the street in front of his home near College Grove in La Mesa. "Well I got a man hole." He laughs, and leads the way through his darkened house, past a small white poodle in the kitchen, and into what is the attached garage. Imitation Persian rugs cover the floor. There are a couple of love seats, a recliner, some guitars, shelves full of electronic gear and computers, clutter, gig posters on the walls. Save for the light coming from a candle and the biggest flat screen TV I've ever seen, the room is dark. It feels like 9 p.m. in the man hole.

"When I was a little bit older, we moved to Austin. That's where I found the guitar. Actually, my brother found it. It was in the trash. That may sound like a lie, but it's true. It had but one string. My brother said it wasn't any good. So I took it, and I drove everybody crazy playing that one string."

Eventually, he talked his mother into buying him an electric guitar out of the Sears catalogue. "A black Silvertone, with metal flake. That was the best thing that ever happened to me." He was in high school by then, and learning the ropes with a friend who likewise had an electric guitar. "We figured out that one of us needed to play bass." Lafayette says he replaced the strings on his guitar with bass strings. Neither of them had amplifiers.

"Somehow, somebody knew that the projector at school had speakers and an amp. We asked the principal, his name was Mr. Hatch, if we could borrow it to look at some educational, you know, some school films." The answer was yes.

"But we didn't watch any films. We knew it had two inputs, and we plugged our guitars in. We played a few parties with that projector." Falquay laughs. "Then, my friend's dad finally bought him an amplifier. It was a Fender, I remember that much, and we both played through that." He says he also played bass and sang in his church.

Falquay moved to San Diego in 1978 or '79, to the best of his recollection. "My wife at the time worked for the IRS. We lived in Fresno before we came to San Diego." He says he had stopped playing after he got married, and that he didn't even own a guitar when they moved to San Diego. "I didn't play for ten years. My wife was glad to have me home."

But when he did return to playing, he was like a bottomless pit of blues songs. Lafayette had forgotten nothing. "That's from my sisters, actually. When I was young, they played blues all the time. Wolfman Jack - they played him on the radio on the weekends at night. Chuck Berry, Little Richard, Fats Domino. One time my sister ran to the radio, yelling it's Fats Domino, and they're playing him during the day!"

Lafayette only recently came out of another mini retirement period that likewise lasted a few years. Why did he come back?

"Because they asked me to. The reason I play music is because I'm asked to play. Otherwise, I probably wouldn't. I have just as much fun right here." He nods, looks around at his man hole.

"I never had guitar lessons in my life." Falquay has his own means of picking and strumming, unusual in that he uses his whole hand instead of a pick. He plays like a fire catching and building in intensity, a style of guitar playing not unlike that of the pitch and cadence of Baptist preaching.

"The only thing I can tell you is that when I'm playing, I'm feeling what I'm playing at the time I'm playing it. When you play one note and it takes you someplace, your whole body goes there. Say your girlfriend or your wife just walked out on you --- how you gonna feel? Or, if you're talking to this lady and you want to convince her you're serious and you really mean what you say, how you gonna do that? That's what you gotta get out of the instrument. I don't think I could have played blues like this when I was younger."

"It just blew me away when I saw him playing -- Little Willie Simmons. He was never recorded. He used to walk by our house all the time on the way to the juke joint and we'd holler at him. I don’t got no time for none of you, he'd say, but he'd come over anyway and pick up the guitar and the notes would flow just like milk. I like Albert Collins, Albert King, and BB King, too, in that order."

"I'm from Chicago, born and raised. It's Michael Stone - Stoney B - on the phone from his East Village apartment home. "I lived in New Orleans 14 years. It was good and bad. I was there for Katrina. I got mandatory evicted. I didn't want to leave. I was right outside Louis Armstrong Park. That's where I lived. The water was chest high, and the Marines came along in a boat and made me get in. I got sent to Lubbock, TX. Once they found they had a Bourbon Street bluesman there, I played for the Red Cross, Texas Tech, and I was on the radio a couple of times.

"After Texas I went back to New Orleans for about a year. Then I rode to San Diego with a friend who was on his way to see his mom in Oregon. I was just going along for the ride. But I liked San Diego, and I stayed. That was about 2007. I was here for a couple of years before I got back in the clubs. I had to put a band together," he says in a manner of speaking that is more Mississippi than Midwest.

"I played with guys older than me, mostly. T Model Ford - he just died. I played with him down in Greenville, Mississippi. I went down there after Chicago. I wanted to experience those real juke joint blues. California doesn't have any juke joints."

"A juke joint is where poor black people go. It's where the crippled, blind, and crazy go to hear the blues. Maybe there's a wasp nest in the roof. Maybe they serve fish sandwiches for a quarter. Maybe there's even some shine in the back, in baby food jars. If you're drinkin', you got to have a fish sandwich," he says, his tone exasperated. "Mostly, the music is life. They might have a regular house band, or maybe they have a Rock-Ola where you can put in a nickel or a dime and hear some blues. It's the gathering place. Everybody knows everybody. People who bust their ass for $25 dollars a week can have a place where they put on their nice clothes. They might even have a craps room in the back where you can throw dice."

Compared to blues on the West Coast?

"Here, it's a different flavor of music. In California, blues is more rock and roll because people like to dance. Muddy said the blues had a baby, and they called it rock and roll. That's all it is. The blues man is a story teller. And nine times out of ten, it's about some sad shit."

Stoney B disappeared suddenly some months ago. What brought him back to San Diego? "I wanted to come home. My wife and my son are here. I had been having a recurring problem with drugs. That's one of my vices. So I just left. I was gone from San Diego from November to May. I went to New Orleans. When Jazz Fest was over, I came back.

Stone plays with an almost absent minded skill from an endless bag of sounds and licks. In his hands, the guitar generally disappears and becomes a tool for the story telling, the notes like the punctuation in a sentence.

"I started at 15. I played the bass until I went in the Army. Then I bought a Fender guitar. I spent four years figuring out what to do with the other two strings."

The blues wasn't necessarily his calling so much as it is in his blood, as Stone tells it. 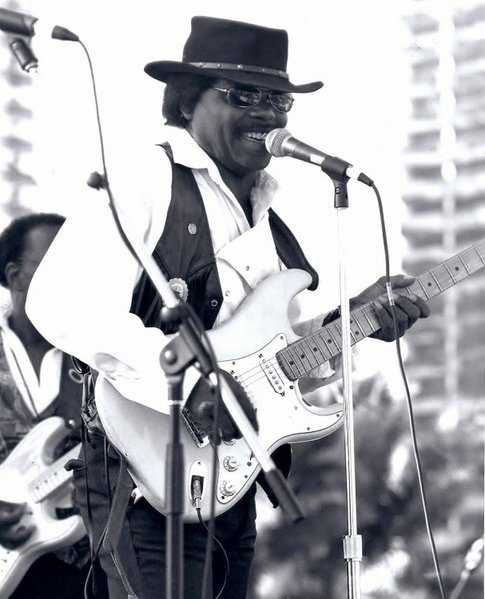 Playing because they asked him to: Lafayette Falquay

This made for a fine Blurt, but it's even better in its full-length glory! Fascinating insight, recollection, and uncompromising honesty -

Lafayette is one of my favorite guys to play music with. I just did a gig with Lafayette, Kevin Cooper and Hindy Bare at Hooley's and it was downright magical. :D