Electronic Mayhem in the East Village 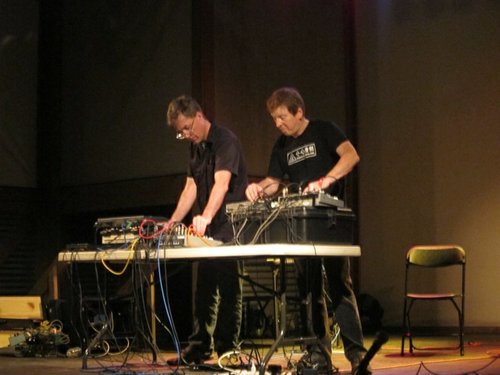 Cage was a brilliant, renegade composer who threw a monkey-wrench into the very idea of what is considered music--changing the course for almost everyone involved in contemporary classical music, electronic-music and even free-jazz.

UCSD professor Tom Erbe began the concert with a specially constructed performance of Cage's "William's Mix", a piece originally written for 8 magnetic-tape recorders to be played simultaneously. Each tape reel contained hundreds of specifically drawn splices, (3,000 in total), with sound material culled from categories like "city sounds", "country sounds", "electronic sounds" and spoken words. Approximately 500-600 sounds in all were used .

The net result is a piece of audio reconfigured for lap-top lasting just over 4 minutes. Because of a large number of late-arrivals, Erbe generously consented to perform the piece twice--which was fascinating to me--because I'd swear I heard audible differences in the two performances.

At any rate, "William's Mix," is a masterpiece of kaleidoscopic sonic assault--especially as played through the massive sound system assembled for this event. At times, it seemed that the piece was mimicking a short-wave radio scanning all of the channels available in Hell, with an epileptic hand manning the dial.

Fusillades of white and pink noise came shooting at the audience from all directions, while fragments of speech, acoustic instruments and ambient-sound of all variety wrapped around the brain in the process.

In a very real sense--everything that followed--and some very brilliant things did follow--suffered in comparison. Measuring up to Cage--even something he constructed in 1952, is no easy task.

Jay Lesser had the unenviable task of following "William's Mix." Lesser explained that he would perform "20 patch-cords in 20 minutes." He worked with a modular analog synthesizer, using the cords to activate feed-back loops along with a mixer and some custom outboard gear.

His piece featured undulating sine, sawtooth and other waveforms manipulated with delay units and mixed in various combinations, occasionally creating a looped "drum-track" out of percussive sound. As one texture would emerge, the addition of a new patch would add to, and occasionally take over. It was pretty wild, and there seemed to be a strong improvisatory element to it.

The duo of Peter Conheim and Jon Leidecker call their collaboration Negativwobblyland, and they used as their primary sound-generators, a bunch of relatively primitive devices called "Boopers." These devices, made out of salvaged radio and amplifier parts, performed an unpredictable series of tone generation once certain buttons, switches and dials were set into motion.

Their set was probably the most fun, and definitely the most visual of all. Having another musician to respond to helped with the human-element, and the ways in which they manipulated sound was inventive and entertaining. They incorporated live sampling into their aesthetic so loops were created, manipulated and abandoned for a set that included leviathan belching, wicked sirens, massive beat generation and video-game warfare.

The headliner was veteran German electronic pioneer Dieter Moebius who has collaborated with Brian Eno, among many others. Moebius' set consisted of him mixing 2 CD's of pre-recorded material, while layering sounds from several samplers and effects devices. Much more than the others, Moebius relied on regular beat-generation, some of them quite raw. As scenes emerged and receded, live sounds and melodies hovered on top--occasionally evolving into a startling complexity. Moebius' second piece cut to the chase much more succinctly. Within a minute or so, a fascinating witches-brew of poly-rhythmic densities and alien-choir textures swirled into the night air--then descended into a logical, musical ending. Impressive. Photos by Bonnie Wright 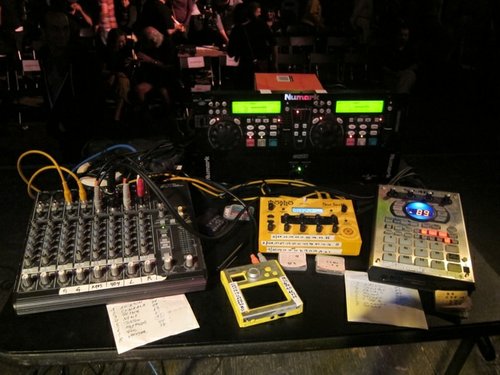 thanks for the great review! you were right, there were many audible differences between the two performances. i forgot to mention in the program notes that cage left a number of things unspecified in the score for williams mix. every time i play it, the specific sounds used are different (the sound categories, the structure, density, spatial movement remain the same).