"The 'Cowboys and Aliens' song that I wrote with San Diego musician Justin Werner is going to be the theme song for the upcoming Platinum Studios Cowboys and Aliens animated motion picture," Scott West tells the Reader.

The song “Cowboys and Aliens” was inspired by the same-named 2006 graphic novel by Scott Mitchell Rosenberg, which provided the genesis for the 2011 film starring Harrison Ford and Daniel Craig, directed by Jon Favreau, and produced by Ron Howard and Steven Spielberg. The upcoming animated version will reportedly stake different territory from the live action adaptation.

"It will be an animated version of the graphic novel. Scott said that our 'Cowboys and Aliens' theme would be great way to end the movie and to be playing as the credits roll, which is what Justin and I had in mind when we wrote it."

West wrote the song’s first incarnation in 2007, later teaming up with O.B.-based Justin Werner to revise it as an acoustic guitar-centered tune. “Justin co-wrote half of the song with me. I made the cool alien craft sounds with a backwards bell sound and a backwards gong. I then used a Starbucks paper cup and plastic drinking straw with ice water in the cup to make the alien laser blast sounds. Everyone thinks that I used keyboard patches, when we did everything organically.” 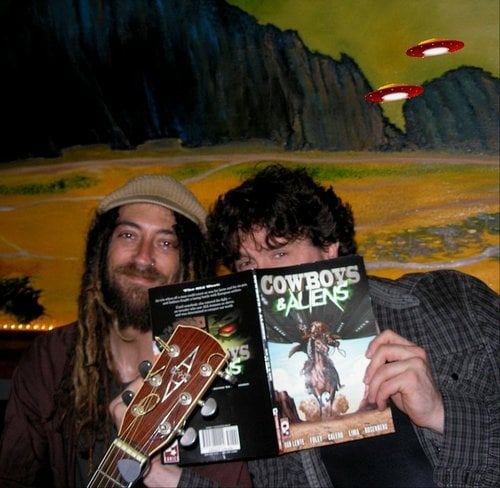 "The animated movie is already in production by Platinum Studios," says West. "Platinum is also going to use our song in the Cowboys and Aliens sequel trailer." The C&A graphic novel sequel publishing date is around ten months away. West's own YouTube video for the song has so far racked up around 1.2 million views.

Last year, the song led to West landing his first publishing deal with Greenlight 360, a Boston company that specializes in placing music on television and in movies. “As a result, we already have several songs being set up for various TV shows...we originally hoped that signing a publishing deal would help us place the song in the [2011 Cowboys and Aliens] movie, but that [soundtrack] was already filled up beforehand.” The Greenlight 360 publishing deal includes both West and Justin Werner.

The tune was also re-released on the local music compilation series Staring at the Sun Volume 9, with an accompanying comic book produced by local comic company BloodFire Studios.

In addition, "I'm currently recording music for Scott Mitchell Rosenberg's upcoming movie The Weapon, which is another graphic novel already in development for the silver screen by Rosenberg's studio," says West.

"Scott [Mitchell Rosenberg] is producing it and Fred Van Lente [Cowboys & Aliens] wrote the graphic novel, which is incredibly action packed. I think The Weapon should be an amazing film and has astonishing franchise potential. I'm tracking a cool fast theme for it this week with San Diego guitarist Mark Huls."

"Tesla's lead guitarist Frank Hannon is also recording a theme with me for one of the treatments this month. I'm very happy with the recorded musical themes we've done so far."

Scott West - who studied audio engineering at Mesa Community College - performs regularly with his own Scott West Band as well as with Happy Ron Hill, Tara Nichol, and others. “I’m living near I-5, between La Jolla and P.B., which is handy access for getting around town several nights a week to gigs. I probably play out 15 or 20 times a month.”

One song from the album, “Keep It Clean,” was recorded with London singer/songwriter Anton Barbeau and bassist Gabe Nelson from the band Cake. The video for the tune was one of only ten music shorts (among thousands submitted) selected to the London Independent Film Festival in April 2010. The video was directed by 17-year-old Phillip ­Stucker.

West's 2010 Xmas album California Christmas was recorded with Wheat and Hannon at Tesla’s Sacramento studio. During its first month on sale, one track from the album scored over 34,000 downloads on Myxer.com. “Frank Hannon and I tracked a live version of ‘Auld Lang Syne’ with just piano, MIDI-ed keyboard strings, and electric guitar. We only made one pass, then Frank laid down some harmony electric-guitar lines and we were done with the track.”

On New Year’s Eve 2010/2011, his “Auld Lang Syne” ringtone hit over 127,000 ringtone downloads. It hit number two among all ringtone categories on Myxer, one of the most popular download sites.

In summer 2011, Cowboys and Aliens director Jon Favreau tweeted West's song and video among his favorites. Here's the trailer for the upcoming animated film:

I really enjoyed Rosenberg, Favreau and Spielberg's Cowboys & Aliens movie and am not sure why a movie that grossed $173 million and netted over ten million in the black based on just box office receipts, before making millions more on the DVD release and licensing of video games, ringtones, t-shirts and apparel, is not generally considered a success for the Hollywood critics. Cowboys & Aliens is a franchise with great brand recognition that goes further than the reach of the first movie, which got decent revenues in a very bad economy! I think the critics that went to see Cowboys & Aliens and wanted it to be a Sci-Fi thriller were disappointed, because it was a Western and Jon shot it as a Western intentionally. He used a classic Western screen format and didn't shoot it in 3D or use a ton of CGI throughout the entire film, because it was a Western. Most of the people I've talked to that saw it, really liked the film and enjoyed it for the Western that it was and not the Sci Fi movie that it might not have been for others. Louie Brazier at Lestats and I were recently talking about this and Louie got this point and really liked the movie. For me it was a great western style movie with a great cast, director and producers. And I really like the NEW upcoming feel of the animated graphic novel, because it is animated and doesn't have to fulfill anyone's expectations to be a thrill-a-second-over-the-top Sci Fi thriller and can just tell the story naturally, which it does! Thank you to my songwriting partner Justin Werner, and to the very talented writer and illustrator Jay Allen and everyone at The Reader!