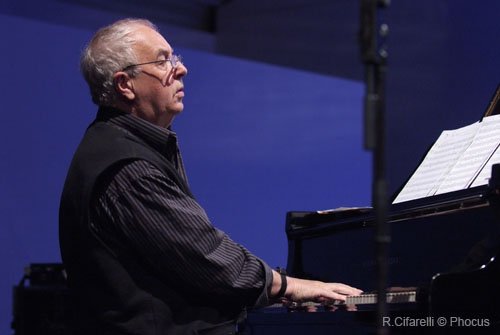 Never mind--those in attendance were treated to one of the best concerts I've seen in a long time.

Berger and Sertso began the concert in a piano/voice duo. Sertso makes the most out of a rather limited range--she does, however have an innate musicality and a long history with the headliner (they are married). Berger's original, "Ornette," seemed to be comprised of a string of phrases that were highly reminiscent of Ornette Coleman's late '50s and early '60s work on the Contemporary and Atlantic labels--and I have to say, those phrases were artfully assembled into a satisfying whole.

Dresser joined the two for an interpretation of Serto' recitation of "A Poem About the Fall," which featured pretty hip sounding incantations of key phrases over Berger's hyper-lyrical piano and Dresser's mix of impossibly rich and resonant arco with fat, slurred pizzicato. Berger and Dresser locked into a turbulent rhythmic exchange of splayed keys against 2 handed string slapping made all the more percussive by the bassist's wedding band bouncing off the fingerboard.

Borgo took the stage for "No Man Is An Island," where all four musicians layered a hypnotic motif --then disassembled it into fragments where Dresser's furious walking and strumming sent the time factor in all directions and Borgo "worried" his tenor saxophone right up to the edge of multiphonics. Berger, on vibes this time--broke up his phrases with the eerie effect of rubbing his mallets horizontally--getting some strange, dream-like textures.

As great as the first half was, this part of the concert was pure magic. Berger alternated between leading the orchestra from the piano and conducting (with special gestures).

Opening with Don Cherry's "Om Nu," vocalists Meghann Welsh and Bonnie Lander joined Sertso in a choir of ghostly overtones that sounded like mood music for the Devil, maybe. Soon the rest of the orchestra: Tommy Babin-contrabass, Joe Cantrell-electric bass, Drew Ceccato-saxophones, Samuel Dunscombe-clarinet, Krzysztof Golinski-drums, Jeff Kaiser-trumpet, Kjell Nordeson-drums, Adam Tinkle-saxophone, Brendan Gaffney-baritone saxophone and David Borgo-saxophone, joined in. The reed choir carried on in the tradition of the vocals, eliciting a kind of pain/pleasure theme while Berger turned up the heat with a dual-drum assault. Tinkle arose, coughing up a hoarse alto spot that traveled from squiggly lines to tortured yelping before Ceccato took over with a glorious solo that evoked the image of Albert Ayler being waterboarded! Not be outdone, Kaiser let loose with statement full of circular breathing and wild trills that could have been the soundtrack for a movie about drowning ferrets.

Berger's original, "Nameless Child," was a wicked free-bop romp that reminded me of Anthony Braxton's Creative Music Orchestra--high praise, indeed. On this one, he cued everyone silent save the virtuoso bassist Babin--who responded with a stunning solo of dark slurs and racing, layered ideas.

Almost all of the musicians got brief spots to shine--especially noteworthy were Dunscombe's clarinet, the voices of Lander and Welsh, and the drums of Golinski and Nordeson. And Drew Ceccato is one of the best saxophonists I've heard in years.

Creative music, free-jazz--whatever you want to call it--is often knocked for being "too serious" and other off-the-mark rejoinders from the closed-ear "experts." This concert was both thought-provoking and a hell of a lot of fun.