The word from his family is that he passed away peaceably sometime early Monday morning in his sleep, of complications from diabetes.

The first time I met Cap Lyons Dunn Lillard was at a strip bar, in the back room actually, where the strippers and patrons came to smoke. Management called it a cigar lounge. It was not.

But there was a large stage and an even larger sound system -- perfect for the type of band that was debuting that night.

It was an AC/DC tribute band called Back 2 Black.

A friend named Brad Kirkbride called me after he'd gotten the notion to put this band together. Still a national touring country music drummer at the time, he was confident that he'd nailed the inner concept of AC/DC.

"I've got the perfect Brian," he said, "and the perfect Angus. The perfect Cliff Williams." And now, Kirkbride had found the perfect Malcolm. But Cap Lillard was bald as me, I said to myself, at just about the same time as he came out of the bathroom wearing a rayon wig that fooled no one.

But when he was on stage in his bad wig and the band fired into "Hell's Bells," Lillard stepped up and into the part of Malcolm Young without flaw.

AC/DC is a band that lives in the realm of a rock and roll that is both primitive and is deceptively simple. The focus of attention has always been on the lead guitar, Angus Young, and his overpowering stage antics. Most people respond to the music in a manner that is purely physiological: a pleasant sort of awe.

And that is how the audience answered Back 2 Black on that inaugural night: with shock and with adrenaline. Art imitated life. Kirkbride was right. The assembled members in the band nailed their parts.

And since the role of Malcolm has always been one of non-limelight support, there are few who stand around and applaud or even take apart what it is that he really does for the band, so I will explain.

AC/DC is essentially one giant four-part power chord. The motor of that band is the drums and the wheels are a thundering bass that rarely leaves the lowest octave. The two guitars fill the mid range -- one on lead, the other on rhythm -- but altering the chord voicings so as to complement each other and not muddy the sound.

With all of that said, there is only one place the voice can go: on top, right?

Cap figured this stuff out. He delivered an impeccable tribute to Malcolm that included the original guitar and amplifier combination right down to the settings. He even had Malcolm's stage moves (sort of a limited hopping-in-place thing) and his vocal harmonies dialed in.

And therein lay Cap Lillard's brilliance as a musician. He was, as Brad Kirkbride had promised, the perfect Malcolm.

Last year, Lillard, a University of Tennessee trained economist sent me an unsolicited note when he learned that I was motorcycle shopping. I wanted a rakish bobber, a rat bike, maybe a suicide clutch/panhead combination. I was thinking about asking Dead Ted to build it.

"Only good for short bar hops," he wrote. But I wanted the rat bike look and sound. "Dave," he wrote back with a degree of patience, "I have built (and here is where my memory fogs. Did he say 47? 75?) Harleys. As soon as you ride a bobber, you won't want it any more."

As it turned out, that was be the last conversation we would have. He quit Back 2 Black and he moved back home to Atlanta, where he was from. He said it was for a new job, but little alarm bells went off in my head at that time because that is my nature.

But if anything larger was the matter with Lillard, he kept it to himself. And that is why his sudden, if peaceful death came as a shock to everyone who knew him.

*Brad Kirkbride and friends are making plans for a tribute concert Fri. Oct 26th at Padre Gold featuring Back 2 Black, Rushed, and more bands to be announced. 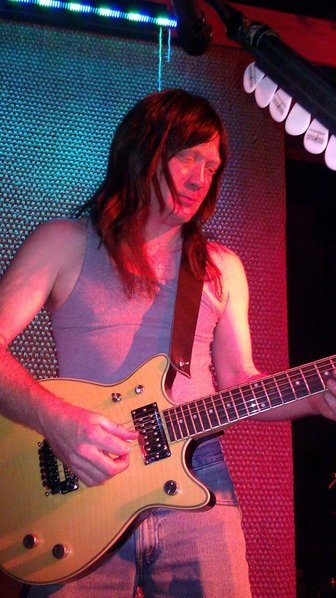 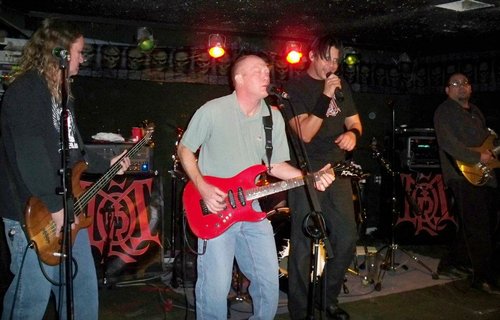 Lillard as himself, sans rug

Thanks for the story ... was tough news after a great night sharing the stage with Cap and the incredible Back 2 Black the Saturday before he passed. He will be missed!

Pleasure to have shared the stage several times with Cap. RIP