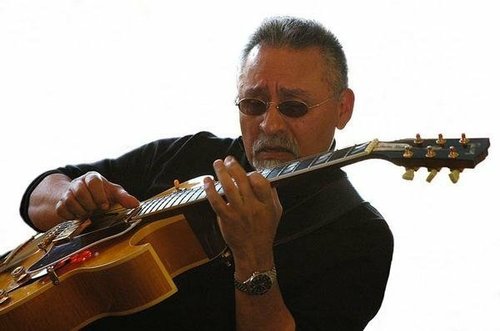 I have occasionally described the attendance at 98 Bottles as "packed," or, "sold-out," and while those descriptions were true, they don't come close to illustrating the audience situation for last night's Jaime Valle concert celebrating the Jewish experience in Spanish speaking countries.

Sponsored by the Anti-Defamation-League, the affair was a private one, and the entire premises--not just The Back Room was loaded with people, standing shoulder-to-shoulder.

It was the first time I ever found myself hoping that the air-conditioning was on full blast.

Valle's expert and veterano Latin jazz ensemble Equinox, came prepared to lay it down, and the crowd couldn't have been more accommodating.

Opening with a classic piano montuno set by Allan Phillips, Valle strummed the vamp while saxophonist Tripp Sprague wailed away. The guitarist ripped through scales and piquant octaves in a modified Wes Montgomery style, and Philips drew cheers for his excellent, idiomatic soloing.

The next piece had an almost Santana kind of groove--featuring the twin engines of congaluero Gene Perry and LA drum-master Ramon Banda, all guided by the wicked and relentless bass lines of Kevin Delgado.

Vocalist Coral MacFarland-Thuet joined the band for a few tunes, and on "Adio Carida," her Spanish fluency (she grew up in Tijuana) and stage presence seemed to inspire the already-ready-to-party crowd. Sprague's tenor sax ripped through melodic sequences with frequent blues asides and Phillips dazzled with two handed octave passages.

Valle had written a song earlier in the day after listening to Ethiopian music ( "There are a lot of Jews in Ethiopia," he said.) This yet-to-be-named piece was the highlight of the evening. Featuring an impossibly catchy melody that Phillips and MacFarland extrapolated into a show stopping scat solo, it was supported by a potent rock groove that drew out the best in everybody.

The Jewish and Latino connection was indeed a celebration of cultural fusion, and the lady sitting next to me sang right along to the melodies as she danced in her chair. In perfect pitch, no less.