“All of these players I’ve either heard of over the years, or I’ve played with, and they’re all guitarists that have a high musical IQ,” says Wayne Riker, whose new full-length Guitar Decathlon features ten tracks, ten styles of music, and ten top San Diego guitarists, one on each song. 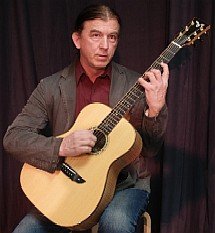 Asked about his guest choices, Riker starts with 28 year-old Laura Chavez, who plays a jump-blues number. “I caught her with Candye Kane's group back in 2010, where I was immediately impressed with her command of the fretboard as a rhythm and lead player.” Jimmy Patton performs an acoustic fusion track. “I remember seeing Jimmy on some of the local TV morning shows, back when he was a teenager, playing two guitars at once with an amazing sense of melody and improvisational skills.”

Jim Soldi appears on a rockabilly track, “I first met him in 1981, when the country scene was bubbling over during San Diego’s Urban Cowboy phase…[this is] the first time we’ve played together.” Andy Tirpak takes on a funk number. “He’s been a longtime veteran bar band musician, playing in numerous bands [like] Atomic Groove and Mother Belle.”

Dan Papaila’s jazz track stems from when he and Riker both taught at Old Time Music in North Park, circa 2007. “We were wall-to-wall in our teaching studios, and would often trade licks back and forth, in between students.” Robin Henkel appears on an acoustic blues song. “We’ve shared many of the same students, particularly blues and jazz.”

For the rock track, “Mike Pfahler is currently with Nemesis, now celebrating 25 years on the local scene.” A Latin number features Peter Sprague, with whom Riker has only performed with publicly once, in 1992 (backing Deborah Liv Johnson). The recording also includes Tony Tomlinson playing urban blues, and Fred Benedetti on a classical tune.

Riker wrote and plays guitar on all the tracks, as well as producing.

“I liken the recording process to an Alfred Hitchcock production, meaning, for the most part, unscripted. There are no overdubs, and most of the tracks were done anywhere from one to three takes, creating a strong live vibe. The absence of keys, horns, or strings keeps an emphasis on the two-guitar theme.”

Since 1967, Riker has played just about every musical style, and in an array of musical settings — house parties, coffeehouses, nightclubs, musical theater, cruise ships, arena rock concerts, and stadium festivals.

“I moved to San Diego County in 1980. My playing career started in my hometown of New York City in 1967, in various eclectic groups, beginning in clubs in Greenwich Village, through the heyday of the Jersey Shore, before moving to the midwest in 1974, playing in the Kansas City area through 1978, and in the Minneapolis area in 1979, before taking a year off to study guitar at the Guitar Institute of Technology in Los Angeles in 1979 and 1980.”

As a member of the Guitar Institute, Riker has cohosted workshops around the world with A-list jazz and blues cats such as Larry Carlton, Robben Ford, Marty Friedman, Dave Grissom, and Duke Robillard.

“In my 32 years in San Diego County, I’ve played in 35 groups, including big band, musical theater, cruise ship and musical duos, along with the more obvious aggregations of top 40, country, funk, jazz, rock, R&B, and blues groups.” Concurrently, Riker has also taught private guitar lessons, in the North Park area from 1980 through 2010 and at Rick’s Guitar Shop.

He’s also taken to telling stories between and during his instrumental performances, such as the time he met Jimi Hendrix cohort Randy California of Spirit or how he almost went to Woodstock in 1969 but instead ended up at a jazz fest featuring a brand-new group calling themselves Led Zeppelin.

In 2011, he helped launch a new Facebook page called San Diego Gives Me the Blues, with local band histories, performance videos, and blues lessons. Around the same time, he began recording a new CD, Guitar Decathlon, featuring ten original tracks in ten different music styles, each with one of ten San Diego guitarists as a guest player.