Aftershocks: The Red Not Chili Peppers Start Over with a New Lineup

"I play Flea, the short guy with the gap in his teeth."

Bassist Jonathan Savage, a surfer who uses the handle fourstringsavage on Myspace, found the first round of members for his Red Not Chili Peppers tribute band some time ago with this Craigslist post:

"There is no doubt that cover bands do well in So Cal or anywhere for that matter....They get booked at major venues and events with ease, they don't have to promote close to as much as a band playing original music, and they still become local legends and make a solid supplemental income. Look at local acts like 40 oz. to Freedom, Cash'd Out, Metal School, etc. If you're like me and love San Diego, don't plan on moving or desire to tour your butt off for peanuts and a slim chance of going anywhere, why not destroy the local scene, make extra money, and have a lot of fun doing it?"

Savage calls to tell me that he has since fine-tuned the band. "[Guitarist] Kenny Kim left the band before I went to Brazil. But when I got back, I had to make the much tougher decision of replacing the lead singer." It had to be a hard call indeed; Jubilee Olivas as Anthony Kiedis was a well-liked, frenetic front man who climbed up into the rafters at Winston's and helped nudge the Red Nots on to victory at a battle of tribute bands last year in Ocean Beach.

"I found someone new in L.A. We talked." This happened last October, Savage says. The singer, Remy Fischer, comes from a musical culture other than tribute, but Savage liked what he heard. "It worked out better than I expected."

Last year, Savage logged some road time with a Brazilian Chili Peppers tribute band led by a mad man who goes only by Luiz. Instead of a tour bus or even a proper van, Luiz borrowed a Geo Metro, a tiny car that barely seats four. But that wasn't the worst of it.

"With two months of a full schedule booked," Savage wrote in his blog, "I was shocked to learn that Luiz didn't yet have a committed guitarist for the tour. Who books a tour with only a drummer and a month to find the remaining musicians? Not to mention the added difficulty of finding musicians for a tribute band. Tribute bands face a problem in that EVERYONE knows exactly how your guitarist should look and sound."

At the last minute, Savage found a guitarist in Sacramento who was available to go to Brazil and do the job, even though he had a bad knee and no coin for a plane ticket. His name is Sean Benham, and after the South American tour, he came to San Diego.

"Benham ended up playing with the Red Nots from January to May." Ultimately, he did not make the cut but some good came from the association. "But I never would have met Marc Aliana (guitarist in a popular Barcelona based Chili Peppers tribute band called the Californicators) if Sean hadn't missed his flight when we bought him to San Diego from Sacramento to begin touring with us last October."

When Aliana moved to San Diego and joined the Red Nots, Savage thought everything had finally fallen into place for the band he started three years earlier. Things were golden -- that is, until Aliana's visa expired and he had to return home to Barcelona.

"The band got him a three-year work visa. He's back now. That was huge, a big hurdle." But whatever the stress level it was worth it, Savage says. "Now, we have an all-star lineup. It's pretty incredible now. The audience reaction is significantly different."

The band members specialize in John Frusciante-era Red Hot Chili Peppers, "from Mother's Milk to Stadium Arcadium. That's a pretty big span. But our heart and soul is Blood Sugar Sex Magik. That was the album that inspired me to pick up bass guitar."

The new Red Nots have played gigs as far away and as diverse as a mud run on Camp Pendleton, in Mazatlan, and at a beer-and-wings festival in El Paso. "I'd never been to Texas before. I was picturing an audience full of blond-hair cow girls but it was all Hispanic. They were the most enthusiastic audience we've played for yet." 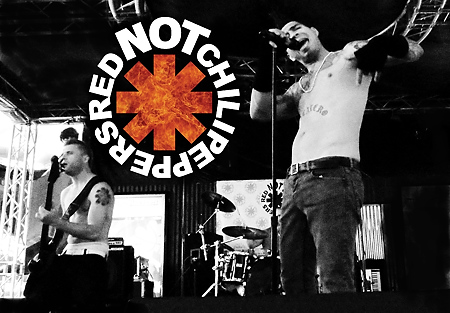 I love this tribute band. Glad to hear everything has fallen into place. Love you guys.