It seemed inevitable: the Crocodiles have finally left Southern California. In a past conversation with the Reader, Crocs co-founder Brandon Welchez expressed his dismay at having grown up in a brown stucco strip mall-ish northeastern San Diego suburb called Poway.

"It was, like, getting beat up by idiots in white pick up trucks and being called a punk rock faggot every day of your life for 12 years. It’s a horrible place to grow up,” he said, “if you’re not a fuckin’ jock.”

Oddly enough, the as-described racist/homophobic gene pool of Poway has produced a number of bands or musicians over the years that have risen to prominence and gained national attention. The short list includes Gabe Serbian of the Locust, blink 182, and Unwritten Law.

The Crocodiles are a noise pop/indie pop band formed in Poway in 2008 by Welchez and Charles Rowell. This, following the break-up of their band The Plot to Blow Up the Eiffel Tower.

Welchez, who is married to Dum Dum Girls front woman Dee Dee Penny, is much happier these days living in New York, in upper Manhattan near Harlem to be exact.

"Culturally, San Diego is very tied to the beach, and I never was into that. Flip flops and Jack Johnson white guy reggae isn't really my thing." He says his band was all but ignored by alt-rock fans in San Diego.

"We can draw 300 in New York, but when we lived there, maybe only 20 people would come hear the Crocodiles play at the Casbah."

Welchez is on the phone to talk about the new Crocodiles album Endless Flowers: "This record was done with a full band, whereas the first record was just the two of us." The logging of road miles, he says, shaped the sound.

"There's a natural cohesiveness that forms when you play night after night for crowds ranging from beloving (sic) to hostile." He laughs. "Hopefully, the audience will hear the tightness." Endless Flowers was less a studio assemblage than earlier Croc-o-records have been in the past. This time, the approach was more of a whole band effort, now that the Crocs have expanded into a five-piece.

"But I don't think any one way is better than the other. People have strict philosophies and that's wrong. The creative process is fine."

Endless Flowers also features full frontal man nudity on the cover. At least, the uncensored version available in Europe does. I think back to Welchez' observations about teen life in Poway, and I elect not to question the choice of image.

But I do want to know this: since the band's membership has grown, was it complicated trying to self-produce a record with more decision makers in the studio? No, it turns out.

"The band had certain input, but there was no real confusion. There was a good blend of personalities. We're friends," he says. "And, this time we had money enough so things were comfortable, not like during the first record when we were in poverty." 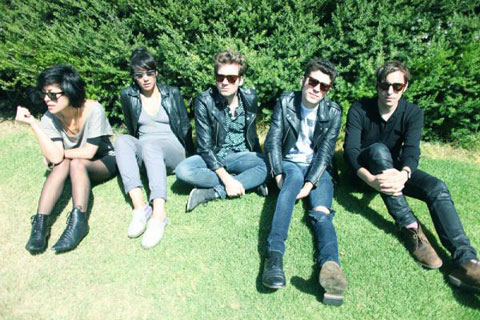