Scott Clayton is talking about music at the Bar Leucadian. He owns On Point Promotions. For the past few years he has booked all of Bar Leucadian's live entertainment, a gig that ground to a halt on Monday, July 2 at 11:30 a.m. That's when California's Department of Alcoholic Beverage Control and the Encinitas Sheriff's Station posted a 45-day suspension of the Bar Leucadian's liquor license.

"The ABC (Alcoholic Beverage Control) suspended their liquor license," says Clayton. "But they also got their cabaret license taken away." A cabaret license, he explains, gives a venue the right to book bands and allow patrons to dance. "I was running everything, from live bands to karaoke to deejays. Open mic nights. That's all over with."

County records say that Martin Van Rosendaal received a liquor license for Bar Leucadian in 2006. "He's so bummed," Clayton says. "This whole thing is a nightmare. All the news stations made it look like the employees were doing it." But Clayton says that was not the case. "They said the club was responsible, but basically, it was one patron who was dealing."

That patron's name is Daniel Beans, says Melissa Beach, who is the Alcoholic Beverage Control Director of North County. She says that Beans, 59, pleaded guilty to criminal charges and is currently serving a three-year sentence. Investigators said they did not believe the owners knew about the drug dealing, but Beach says "there was employee and management involvement too."

The license suspension came as the result of a months-long investigation between the ABC and the Encinitas Sheriff's Department. Based on an anonymous complaint, undercover officers purchased cocaine at the Encinitas nightclub on a number of occasions.

Beach says the 45-day suspension is part of the penalty phase. "After this, they will be on probation for three years. They'll have to close at midnight, they're going to have to have a security guard, and there's no dancing or live entertainment."

She says it was the City of Encinitas that revoked Rosendaal's cabaret license, which she says may be appealed at a later date.

In recent months, locals such as Pandora, Samz Jam, the Bastard Sons of Johnny Cash, Chill Boy, and Brawley booked gigs there. So did Jeff Moore and the Witchdoctors, until they stopped hiring him a few years ago. Known for being a loud and sometimes rowdy roadhouse, Moore was too high-wattage even by Bar Leucadian standards.

Was Moore ever aware of any nefarious goings-on at the club? "No," he says, "other than I heard it was shut down for activity. But in the bigger picture," he says, "this is gonna impact a lot of people."

In the meantime, can Rosendaal have so much as a juke box?

"Yes. He can have a juke box. It's a type 48 license," says Beach. "A bar. That means they are not required to serve food. Only soda and water can be served during the suspension period. What the owner will do for 45 days," she says, "I don't know."

Scott Clayton knows: "He is taking the next 45 days to clean up and renovate the place." 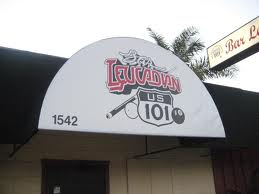 Dancing days are over at the Leucadian